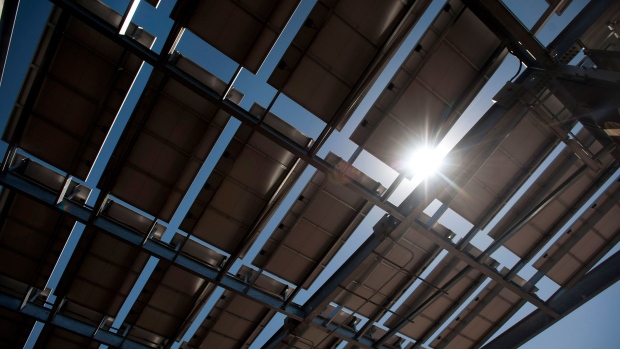 Solar panels stand above a parking lot at Arizona State University in Tempe, Arizona, U.S., on Tuesday, June 11, 2013. Solar installations in the first quarter increased 33 percent to account for almost half of all new electric capacity installed in the U.S., according to a trade-group report. , Photographer: Laura Segall/Bloomberg

Clearloop recently broke ground on its first 1 megawatt project in the state with a company buying offsets for as little as $1,000, an idea inspired by crowdfunding, founder and CEO Lara Zapata said. The approach eliminates the need for long-term power sales contracts.

“The Clearloop model democratizes the ability to participate in the energy transition,” Farr said in a telephone interview.

This new model could make solar projects more accessible for companies that haven’t had the ability to commit to 20-year contracts to buy power such as Amazon.com Inc., WalMart Inc., Apple Inc. and other corporate giants. The goal is to target communities that haven’t seen investments in a long time or places where “the grid tends to be the dirtiest,” such as the Mississippi Delta and Appalachia, Clearloop’s Zapata said.

For Shell, it’s another way to expand on its march to become the world’s largest independent power producer. Last year, the company, like many of its peers, ramped up its climate ambitions with promises to cut emissions and diversify into cleaner sources of energy. Its $3 billion-a-year ceiling for spending on renewables and low-carbon technologies compares with the $8 billion it has set aside for oil and gas this year.

Silicon Ranch has built almost 2 gigawatts of solar generation in about eight years and currently has 700 megawatts under construction. The next Clearloop projects will be at least 3 megawatts, Farr and Zapata said.