Value of cryptocurrencies will go much higher in the next few years: Greg Taylor

A brutal bout of selling that wiped billions of dollars from profitless growth companies, IPO stocks and SPACs has now caught up with Bitcoin, further stressing risk tolerances and brokerage balances among small-time traders.

Retail dip-buyers, whose willingness to stand firm amid turmoil has helped power the S&P 500 to a 21 per cent gain in 2021, are nursing some of their worst wounds of the year as losses pile up in speculative corners. A hawkish turn from the Federal Reserve and the omicron variant have erased more than 10 per cent off the market value of cryptocurrencies, US$50 billion from newly public companies and 14 per cent from a basket of meme stocks.

While day-trader resolve has been tested before, it’s been years since it happened without the open-ended support from central banks, whose changing tone around inflation sent risk markets spinning last week. Professional speculators have already voted, offloading risk at the fastest pace in 20 months.

Big drops in an asset like Bitcoin have the potential to lower confidence among the larger population of bettors, a concept described as negative wealth effect. All told, crypto investors have some US$250 billion less to play with in their accounts than they did when stocks starting sliding Nov. 26. It’s a worrisome backdrop for the market.

“Buying the dip did not work well last last week, so the retail traders could be pulling in their horns a bit,” said Matt Maley, chief market strategist for Miller Tabak + Co. “Since they have been so important to the demand side of the supply/demand equation this year, their absence is an unwelcome development for the bulls.” 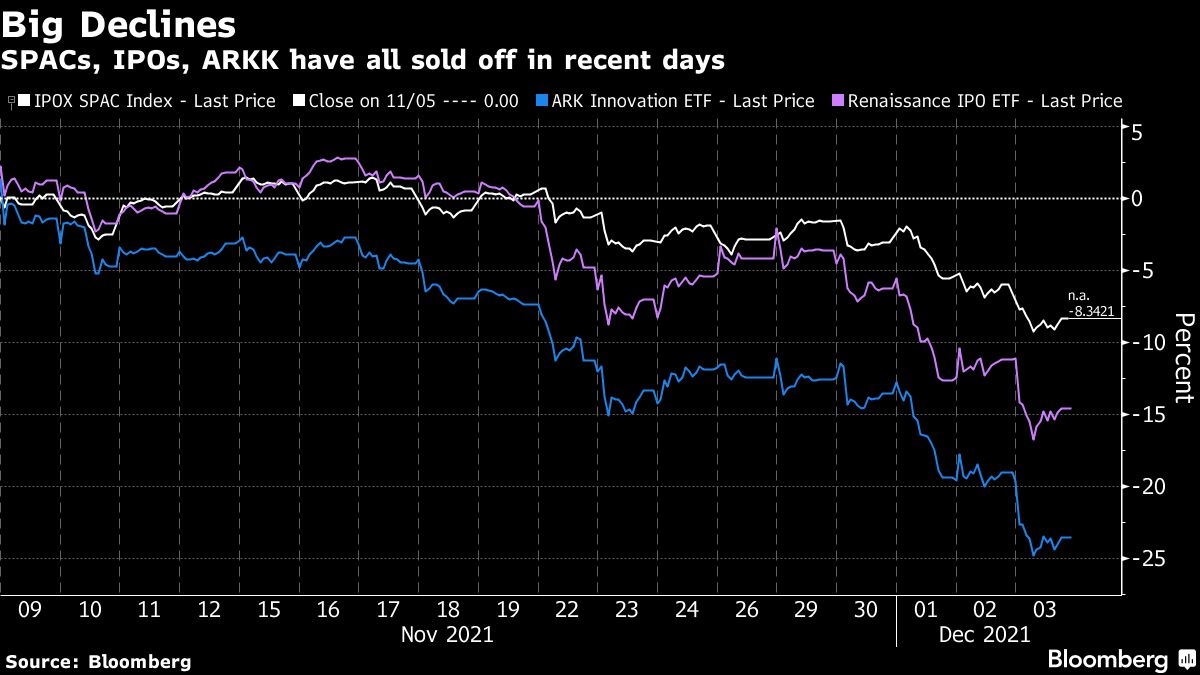 If Bitcoin, which trades around the clock, is any indication, markets will be in for more volatility. The cryptocurrency lost as much as 21 per cent since Friday’s stock-market close and swung wildly throughout the weekend. The decline brought it down to around US$42,290 at one point, well below its record high of near US$69,000 just a few weeks ago. Meanwhile, Bitcoin futures open interest is also plunging and funding rates on a few major exchanges turned negative, meaning those with short positions are paying a premium -- all signs crypto positions are in a liquidation frenzy.

The past week’s retreat across stocks and cryptocurrencies provided more evidence that Bitcoin is an imperfect hedge for institutional portfolios. While it has an alluringly near-zero correlation with major asset classes, whenever stocks have sold off 5 per cent or more over a month over the past decade, Bitcoin has dropped 86 per cent of the time with an average 13 per cent decline, asset manager Man Group wrote in a recent note.

“Bitcoin is seen as a key risk-on/risk-off asset, so if it stays down -- and especially if it continues to fall -- it will be a big red warning flag for other risk assets next week,” Maley said.

Matthew Tuttle, chief executive officer at Tuttle Capital Management LLC, agrees. Crypto bulls like to make the argument that Bitcoin is an inflation hedge, but it really acts like a risk-on asset, he said.

“A selloff is not a good thing for equities, they are related from the risk on/risk off perspective,” he said in an interview. “Which is unfortunate because equity markets ended Friday on a decent note. Losses in such a big area are also never good for overall sentiment.”

Traders’ nerves have been repeatedly raked over the past week -- and the superlatives have added up quickly, with high-flying speculative companies taking big beatings.

Cathie Wood’s ARK Innovation fund lost near 13 per cent, its worst week since February. An index of special purpose acquisition vehicles, or SPACs, lost around 6 per cent in that period, its worst showing since March. And an exchange-traded fund from VanEck that tracks some of the most-favorably mentioned companies on the internet lost nearly 9 per cent.

Retail traders are even souring on some big-tech names that had previously been market darlings, including Facebook-parent Meta Platforms Inc., which fell almost 8 per cent over last week. That far outpaced losses among its megacap technology peers, but it wasn’t met with the surge of buying from retail investors that’s helped lift the stock out of previous selloffs.

Equity positioning suffered the sharpest weekly decline in since the collapse in March 2020 at the beginning of the pandemic, Deutsche Bank AG strategists led by Parag Thatte wrote in a note Friday. It went from near the top of its historical range to around the 50th percentile, the lowest this year, they said.

Doug Ramsey, Leuthold Group chief investment officer, says his firm’s internal measures of oversold conditions are extreme, down to levels that would be expected to produce a rally even if stocks were in the midst of a major bear market, not the current bull run. “So if the market can’t rally next week --especially with the very favorable calendar -- I would be very worried,” he said.