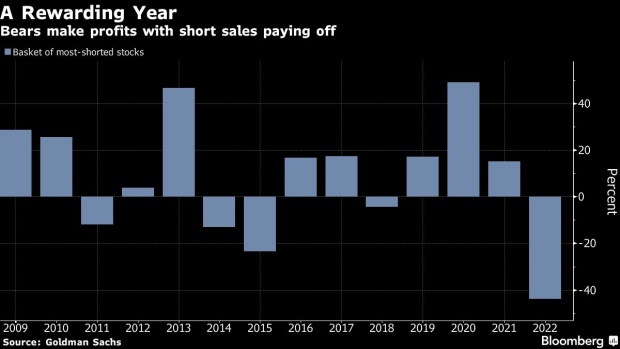 Pedestrians pass in front of the New York Stock Exchange (NYSE) in New York, US, on Wednesday, Nov. 9, 2022. US stocks declined following midterm elections that failed to yield a Republican sweep. Treasuries and the dollar caught bids in a sign of deteriorating risk sentiment. Photographer: Michael Nagle/Bloomberg , Bloomberg

(Bloomberg) -- Order has been restored to the world for bearish traders, with their favorite targets under pressure again after surging during the recent equity rally.

Stocks with the heaviest short interest dropped 3.5% Tuesday, more than double the losses in the S&P 500, going by thematic baskets compiled by Goldman Sachs Group Inc. In what may be a sign bears are reloading, Russell 3000 shares with the highest quintile of short sales trailed those with the lowest more than 2 percentage points, according to data compiled by Bloomberg.

The retrenching came as a four-day slide dragged the S&P 500 back below its 200-day moving average amid concern that stronger-than-expected reports on the US labor market and services industry would force the Federal Reserve to stick to its aggressive pace of tightening to tame runaway inflation.

The renewed selloff is a vindication for hedge funds that, according to Wall Street’s major prime brokers, added to bearish wagers last week in the face of market gains. While prior bouts of rising bearishness like this have given way to short squeezes this year, this episode reflects growing angst ahead of next week’s inflation reading and Fed’s final policy decision of 2022.

“Few HFs see much upside at current market levels and are perhaps looking to trade the range,” JPMorgan Chase & Co.’s team including John Schlegel wrote in a note to clients Friday. “Positioning levels still appear fairly low on a longer-term basis (which could support a rally), but they’re not as low as they were at the end of September to argue that the market will keep shrugging off bad data points.”

While the S&P 500 is on track for just its second double-digit loss in 20 years, it’s been a rewarding time for bears. Down more than 40%, the Goldman basket of most-shorted stocks is poised for its worst annual performance since data began in 2008, a loss that essentially amounts to profits for those wagering against these shares.

But reaping these gains would have required a strong stomach. Bear-market rallies have come time and again, including a 14% jump in the S&P 500 over the seven weeks through the end of November. Short sellers were forced to unwind a total of $53 billion of their positions in individual stocks last month alone, according to IHS Markit data compiled by Morgan Stanley’s sales and trading team. That’s the fastest short covering since at least 2018.

Yet the bears remain uncowed. On Wednesday when the S&P 500 surged 3% on Fed Chair Jerome Powell’s comments on a possible downshift in the pace of tightening, hedge funds tracked by JPMorgan stepped up their wagers against single stocks.

A similar pattern played out at Goldman, where hedge fund clients last week put up short sales at a rate that outpaced their long buying by a ratio of 1.5 to 1. At Morgan Stanley, fund clients increased shorts with the bulk of addition concentrated at the index level via exchange-traded funds and across technology and financial industries.

The boldness is paying off, at least for now. The Goldman’s basket of most-shorted stocks dropped more than 3% for two days in a row.

From Morgan Stanley to JPMorgan, many Wall Street firms have seen their strategists calling for the S&P 500 to test its 2022 lows next year, citing everything from a looming earnings contraction to persistent Fed tightening.

The bleak sentiment got another boost from Goldman’s financial-services conference Tuesday, where some Wall Street chiefs sounded alarms about consumer weakness.

It’s “a bit of a perfect storm near term,” said Dennis DeBusschere, founder of 22V Research. The “Fed looking at lagged data pushes up terminal rate at the same time companies are sounding worse and worse on growth outlook.”

--With assistance from Melissa Karsh.

(A prior version of this story was corrected to fix the spelling of Morgan Stanley in fourth paragraph under chart.)