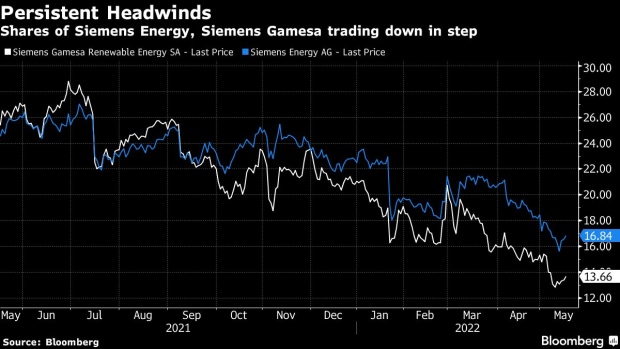 A worker passes wind turbine blades at the Siemens Gamesa Renewable Energy SA plant at the Port of Le Havre in Le Havre, France, on Monday, April 11, 2022. French government coffers are getting a boost from renewable energy as record power prices reduce state subsidies and even trigger reimbursements from the industry, the country’s wind trade group said. , Bloomberg

(Bloomberg) -- Siemens Energy AG is planning a bid for the shares of Siemens Gamesa Renewable Energy SA it doesn’t already own, a long-speculated step in its efforts to turn around the Spanish wind turbine maker, people familiar with the matter said.

Siemens Energy is preparing to make an all-cash offer in the next week with a view to delisting the firm, the people said, asking not to be identified because the information is private. It already owns 67% of Siemens Gamesa, which currently has a market value of 9.6 billion euros ($10.1 billion), according to data compiled by Bloomberg.

Speculation about a full takeover has been swirling for months as project delays and cost overruns mount at Siemens Gamesa, triggering several profit warnings and a suspension of its guidance. The issues have raised the prospect that Siemens Energy might tighten its grip on the unit to address the problems.

Any offer is likely to contain only a small premium, the people said. The average analyst target price for Siemens Gamesa is slightly above 18 euros per share, according to Bloomberg data.

Shares of Siemens Gamesa are down 33% this year, even after a sudden surge in late Tuesday trading.

No final decisions on price or timing have been made, and the company could still opt against making an offer, the people said. A representative for Siemens Energy declined to comment, while Siemens Gamesa couldn’t be immediately reached outside regular business hours.

Restructuring veteran Jochen Eickholt took over as Siemens Gamesa’s new chief executive officer in March, replacing Andreas Nauen, who was on the job for less than two years.

Turbine makers are facing rising costs for energy, steel and copper as well as supply chain disruptions that are squeezing profits. The core of Siemens Gamesa’s problems is in its onshore division, where the company has been facing difficulties scaling up its new turbine model, dubbed the 5.X platform.

Earlier this month, Siemens Gamesa reported another quarterly loss and said it’s keeping its full-year guidance under review. Its net loss widened to 377 million euros in the fiscal second quarter.

Siemens AG, the European industrials giant, still owns a sizable stake in Siemens Energy after listing the unit in 2020.