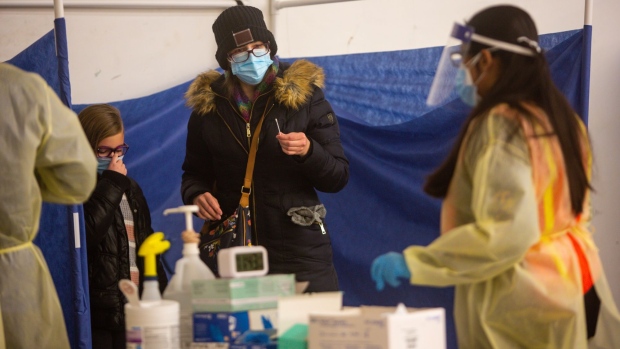 A resident hands a healthcare worker a swab after taking a Covid-19 test at the Brooklyn Park Testing Center in Brooklyn Park, Minnesota, U.S., on Tuesday, Jan. 4, 2022. Covid-19 cases reported in Minnesota passed the million mark this week as the world continues grappling with the Omicron variant and ongoing pandemic. , Bloomberg

(Bloomberg) -- Singapore infections increased at the fastest pace in nearly two months amid the worldwide spread of the omicron variant. A U.S. agency said travel to the Southeast Asian nation should be avoided.

Fewer U.S. patients are ending up in intensive-care units than last winter as omicron’s trajectory mirrors the experience of South Africa and the U.K. But Maryland expects hospitalizations to rise and declared a state of emergency.

The U.S. government is buying another 10 million courses of Pfizer Inc.’s Covid pill, matching a previous order. Omicron now accounts for 95% of new sequenced cases there.

Infections climbed to a record in Greece, which is planning to reopen schools next week as scheduled. Germany eased travel from the U.K. and South Africa.

Texas Governor Greg Abbott sued the Biden administration over its effort to impose a coronavirus vaccine mandate on National Guard troops, saying it violates state sovereignty to require the shots when the troops are not on active federal duty.

Under U.S. law, National Guard units answer to the states where they are domiciled unless they are called into active duty by the federal government. Abbott’s lawsuit also cites Texas’s state constitution, saying its governor serves as the national guard’s commander-in-chief except when the troops are called into federal service.

The dispute between Texas and the U.S. has been brewing since at least last month, when Abbott said he wouldn’t enforce the vaccine mandate on National Guard soldiers and then said he would sue to block it.

The U.S. Centers for Disease Control and Prevention reclassified its Covid-19 travel advisory for Singapore, guiding Americans to avoid travel to the Southeast Asian nation because the level of the disease there is “unknown.”

“Because the current situation in Singapore is unknown, even fully vaccinated travelers may be at risk for getting and spreading COVID-19 variants,” the CDC said in its advisory.

Walmart Inc. and Kroger Co. are boosting the price of a popular at-home Covid-19 test after a deal with the White House to sell the kits at cost expired.

The price of BinaxNOW tests at Walmart is rising to $19.88 this week from $14, the company said in an email Tuesday. Kroger said it reinstated “retail pricing” after completing the three-month commitment to President Joe Biden’s administration.

CVS Health Corp. and Walgreens Boots Alliance Inc., which weren’t parties to the deal with Biden, have been charging $23.99 for the Binax tests, which are made by Abbott Laboratories.

American Express Co. postponed its return to U.S. offices amid a surge in Covid-19 cases linked to the highly contagious omicron variant.

The New York-based credit-card giant will give employees two weeks’ notice before it starts bringing a larger number of staffers back to its offices. The firm had previously said it intended to start bringing back employees beginning Jan. 24.

The omicron variant is accounting for the lion’s share of new coronavirus cases as Americans return to work and school following the holiday season, according to estimates from federal health officials.

The U.S. is reporting a weekly average of 485,363 cases, about twice the peak of last winter, and true prevalence is projected to be far higher. But U.S. hospitals have just 64% of the Covid patients in adult intensive-care beds as they did at last winter’s peak, and hospital deaths with Covid are around 52% of last winter’s worst period.

U.S. hospitals are so far seeing significantly fewer severe outcomes from the omicron wave than they saw in past Covid-19 spikes, mirroring the experience of South Africa and the U.K. Even New York, the uber-dense site of one of the nation’s worst outbreaks, is seeing similar results.

The Republican governor and the state’s surgeon general, Joseph Ladapo, criticized what they see as over-testing, such as for those seeking to engage in social events or for children to return to in-person education.

Pfizer Inc. said the U.S. government has agreed to buy an additional 10 million courses of its Covid-19 pill, adding to the country’s stash of virus-fighting tools.

The Greek government reached an agreement with the country’s association of private clinics to use 10% to 15% of their ordinary beds for managing Covid patients when needed, Health Minister Athanasios Plevris said. Greece reported 50,126 new coronavirus cases Tuesday, the highest daily increase since the start of the pandemic. Despite the jump, the country’s schools will reopen as scheduled on Jan. 10 with stricter testing protocols.

Maryland Governor Larry Hogan declared a 30-day state of emergency as he predicted hospitalizations could reach more than 5,000, a 250% increase from a peak reached a year ago.

The next four to six weeks “will be the most challenging time of the entire pandemic,” Hogan said Tuesday at a virus briefing.

Hogan announced several actions to deal with the crisis, including giving the state’s health department the authority to direct and expedite transfer of patients; establishing alternative care facilities; allowing inactive health-care practitioners to help out without having to get their licenses renewed; authorizing graduate nurses to provide full nursing services; and activating 1,000 members of the Maryland National Guard to assist.

The Centers for Disease Control and Prevention recommended that people get a booster shot with the Pfizer Inc.-BioNTech SE vaccine five months after their first two shots, shortening the interval from the previous six-month regimen.

The new recommendation comes one day after the U.S. Food and Drug Administration changed its emergency authorization for the shot to reflect a shorter dosing interval for the booster.

Germany has eased travel from the U.K. and South Africa by dropping them from its list of so-called areas of variants of concern.

Vaccinated travelers from those countries will no longer need to quarantine in Germany if they can show a negative test result before arrival.

The move comes as total suspected and confirmed cases of the omicron variant rose 17% to 35,529 cases.

Giorgio Armani has canceled January’s shows in Milan and the Paris fashion weeks due to increasing infection rates in Europe, the Italian company said in a statement on Tuesday.

The move was made “with great regret” because the shows are considered “crucial and irreplaceable occasions,” the fashion house said in the release. Valentino’s Vintage campaign has also been moved from January to April, the Italian company said in a separate statement.