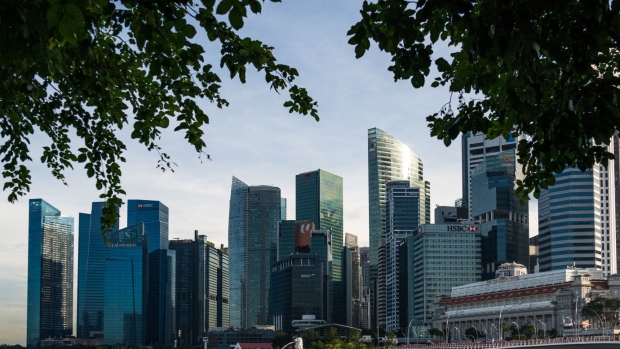 The Merlion Statue and Jubilee Bridge stand in front of the city skyline during the "circuit breaker" lockdown in Singapore, on Wednesday, May 20, 2020. Singapore will allow more businesses to reopen on June 2 -- increasing the active proportion of the economy to three-quarters -- after a nationwide lockdown cut transmission of the coronavirus among citizens and permanent residents. , Bloomberg

(Bloomberg) -- China Wanda Group, the parent company of Singapore-based Hontop Energy, is close to settling the troubled oil trader’s disputes with two of its major lenders, according to people familiar with the negotiations.

Shandong-based conglomerate China Wanda is in advanced talks with DBS Bank Ltd. and Societe Generale SA, and has agreed to pay the outstanding debts on behalf of Hontop Energy (Singapore) Pte. via its other subsidiaries, said the people, who asked not to be identified as the talks are private.

Banks have been struggling to collect debts from failed commodities traders after oil’s collapse exposed financial shortfalls and sparked accusations of fraud and dishonest dealings. If successful, the Hontop deal could mark the first significant settlement amid a wave of disputes this year between trading houses and their lenders.

Hontop, which went into receivership in February, was placed under judicial management earlier this month by a Singapore court. Its outstanding debts totaled $469 million to seven lenders as of February, of which $33.2 million was to DBS and $63.3 million to SocGen, a general manager at Hontop said in an affidavit.

SocGen said by email Thursday that it’s “not in a position to comment”, while DBS declined to comment. Emailed inquiries to Wanda Group and Hontop’s judicial manager, RSM Corporate Advisory, went unanswered.

Hontop, which bought crude oil on behalf of an affiliated Chinese private refiner, Shandong Tianhong Chemical Co., said in March that its financial difficulties were caused by a collapse in demand because of the coronavirus.

That was before the virus spread globally, sparking oil’s crash that saw prices in April momentarily plunge into negative territory. The turmoil exposed the risks of financing the opaque business of moving raw materials around the world, and rocked the close-knit oil trading community in Singapore, one of the world’s most important commodity hubs.

(Updates to add DBS declined to comment in 5th paragraph)