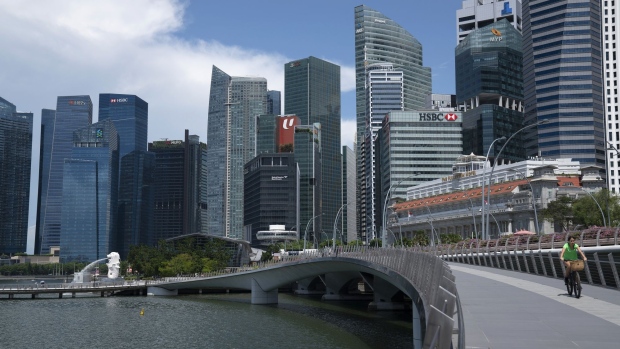 The Marina Bay Sands hotel and casino, right, and other buildings stand beyond the Marina Barrage in Singapore, on Thursday, Feb. 6, 2020. While governments around the world are struggling to meet the goals of the Paris agreement. Singapore is devising a S$100 billion ($72 billion) plan to safeguard the city against temperatures and floodwaters several times those levels. The real challenge facing the island, though, is water. Singapore has a network of reservoirs to catch most of its rainwater and is able to recycle about 40% of its water needs. Photographer: Wei Leng Tay/Bloomberg , Bloomberg

(Bloomberg) -- Singapore’s total population has fallen for the first time in 17 years as the economic fallout from the coronavirus pandemic saw less foreigners working in the city-state.

The southeast Asian nation’s total population dropped 0.3% to 5.69 million as of June from a year ago largely due to a reduction in foreign employment in the services sector, according to Singapore’s annual population report released Thursday. Total population, which include citizens, permanent residents, foreign workers and students, last fell in 2003 to 4.11 million from 4.18 million the year before.

“These trends were largely due to COVID-19 related challenges, brought about by weak demand and travel restrictions,” according to the report.

Foreign workers became a key election issue this year, with several opposition candidates campaigning that jobs are getting taken away from locals. The government has in recent weeks taken more steps to promote hiring of Singaporeans and has tightened its framework for issuing employment passes for foreigners.

Separately, Singapore’s proportion of citizens who are at least 65 years old has increased to 16.8% from 10.1% in 2010. The government is projecting this group will account for nearly a quarter of the citizen population in 2030.