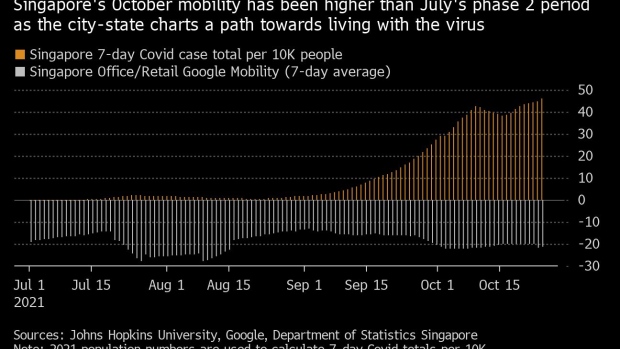 Visitors at the Rain Vortex indoor waterfall feature at the Jewel Changi Airport mall in Singapore, on Sunday, Oct. 3, 2021. Singapore Trade Minister Gan Kim Yong said the government is committed to reopening the country gradually after reimposing domestic curbs such as making work-from-home the default and cutting the number of diners to deal with a surge in cases. , Bloomberg

(Bloomberg) -- Singapore now occupies the lowest spot ever in Bloomberg’s Covid Resilience Ranking for a former No. 1 as the city-state confronts a trail-blazing, but polarizing, shift to living with the virus.

Ranked in pole position in April and never lower than 19th until now, Singapore has tumbled 20 places in the past month to No. 39 on October’s lineup as it sees record cases and deaths.

While vaccination coverage is one of the highest in the world and overall death toll one of the lowest, it scores poorly in most other indicators: strict domestic curbs have crimped mobility and stringency metrics, while a slow travel reopening and flight capacity recovery is still far behind that of Europe and the U.S.

This worst-of-both-worlds situation is likely to be temporary transition pains, as Singapore forges an unprecedented path to being among first Covid-Zero countries to pivot to treating the virus as endemic. If it succeeds, it will have the distinction of being one of the only places in the world to normalize without waves of death.

Yet the country’s tribulations could be a major factor why China and its territory of Hong Kong -- Singapore’s Asian financial hub rival -- are reluctant to go down the same path, though concern is growing that their isolation is unsustainable.

Singapore’s status as a trade and transport hub has made its government determined to open borders up, announcing vaccinated travel lanes to parts of Europe, Australia and the U.S. in recent weeks, and allowing international conferences with social distancing rules in place. It’s now trying to ease the strain on the healthcare system by maintaining domestic restrictions at least until late November.