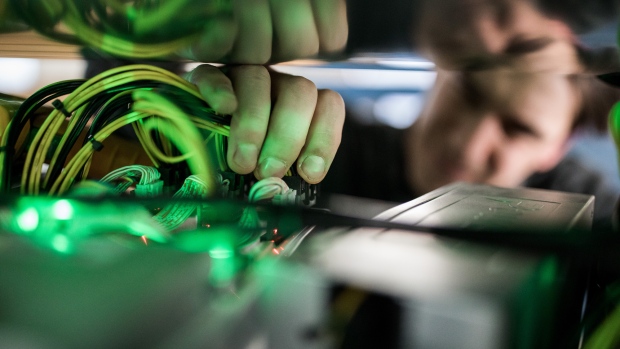 Sebastian Kastner, lead engineer at HydroMiner GmbH, handles cable connections between cryptocurrency mining rigs on racks at the company's mining facility near Waidhofen an der Ybbs, Austria, on Friday, Jan. 19, 2018. HydroMiner, the Austrian cryptocurrency miner that mines bitcoins with green energy, is weighing an initial public offering to fund an expansion outside its home country. , Bloomberg

While Coinbase said it garnered investment in its October funding round from firms including Tiger Global Management, Wellington Management and Andreessen Horowitz, GIC’s participation hasn’t previously been disclosed. GIC declined to comment, while an official for Coinbase also declined to comment.

With the foray into digital assets, possibly its first, GIC joins a select group of large sophisticated investors including Yale University willing to dip their toes into the crypto industry. Most institutional money managers have shunned digital assets because they’re largely unregulated and have been used to finance illicit trade.

GIC has more than $100 billion of assets in over 40 countries and has investments in everything from government bonds to private equity.

Coinbase’s October funding round gave it a valuation of $8 billion, placing it among the ranks of the world’s most-valuable startups. That’s all the more impressive given the collapse in crypto prices last year.

According to documents seen by Bloomberg late last year, the firm was forecasting revenue for 2018 of almost $1.3 billion, a figure that largely comes from the commissions on trades on its platform, as well as gains and losses in its own crypto holdings.

To contact the reporters on this story: Alastair Marsh in London at amarsh25@bloomberg.net;Julie Verhage in New York at jverhage2@bloomberg.net

To contact the editors responsible for this story: James Hertling at jhertling@bloomberg.net, Peter Vercoe, Katrina Nicholas