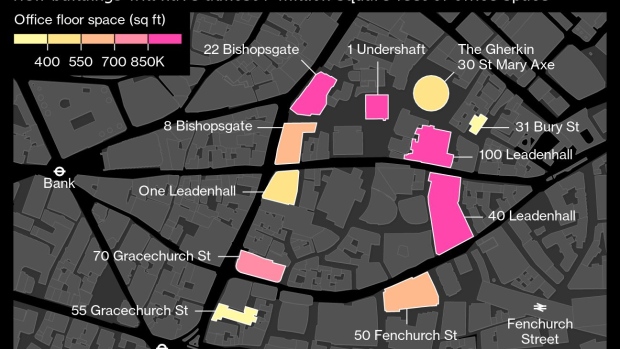 (Bloomberg) -- When the Gherkin tower opened 17 years ago, its skyline-defining silhouette heralded a new era in the low-rise City of London. Now, a spate of new planned skyscrapers threaten to erase it from view and from relevance.

As one of the Gherkin’s main residents weighs a move, even iconic buildings risk struggling to keep or replace tenants in London’s premier financial district. While the pandemic is emptying City offices at the fastest pace in more than a decade, it hasn’t slowed the coming wave of towers. That carries a warning for landlords: if there is a return to the office, it won’t be to drab buildings that only feature endless rows of desks.

It all augurs another period of change for the City, a geographical area of just over one square mile with a 2,000-year track record of reinvention. For property firms that have seen the district as a cash cow for decades, the challenge is daunting: how to refill, revamp or sell hundreds of aging offices vulnerable to the twin blows of Brexit and the pandemic.

In a financial hub that draws more international capital than any other, the fate of the older buildings could hit the fortunes of some of the world’s biggest real-estate investors, from China Investment Corp. to Norway’s sovereign wealth fund and Malaysia’s biggest pension fund.

“Would I buy an existing investment property in the City of London today? Probably not,” says John Ritblat, the octogenarian former Chairman and Chief Executive Officer who built British Land Co. into one of London’s biggest landlords over nearly four decades. But if “you can build on cost, on time and let a new office appropriately, that is still a very good bet.”

Several developers are taking that bet. Three skyscrapers are currently being built within 100 yards of the Gherkin, with the same number approved nearby, some of the 18 major towers at various stages of the planning process in the City, data compiled by Bloomberg and the City of London Corporation show. One of the Gherkin’s biggest tenants, law firm Kirkland & Ellis, is weighing a move to one of those new buildings, people briefed on the matter said.

The Gherkin, owned by the family of late billionaire Joseph Safra, was one of only four City buildings higher than St. Paul’s Cathedral when it was finished— that number could leap closer to 40 this decade.

The Gherkin’s “advanced design continues to be the benchmark by which others are measured,” said a spokesperson for J. Safra Group. “The tenants enjoy these benefits and remain committed to long-term growth within the building.”

A spokesperson for Kirkland & Ellis didn’t respond to requests for comment.

The zeal of developers starkly contrasts with the debate about the future of the office that’s raged since Morgan Stanley boss James Gorman predicted one with much less real estate, in April last year. Even now, skeptics are still forecasting a far different era for the City and rival financial district Canary Wharf, after banks that were already offloading space accelerated their downsizing and wealthier employees fled to the country with dreams that working remotely might just last forever.

As firms entice workers back with promises of more flexibility, developers are betting on top rents for the best new buildings as tenants pay more for offices that suit their post-pandemic needs. There aren’t many in London that currently tick that box, and a recent lull in construction means those brave enough to start now should have even less competition when their projects complete in a few years time.

“We have made the most money developing new buildings out of crises,” said Simon Carter, the current chief executive officer of British Land. “We had a big development program after the global financial crisis which people had a negative reaction to at the time, but which proved to be very successful.”

The landlord isn’t wasting time. It recently won consent for a new 38-story skyscraper at Broadgate, the office campus long regarded as the embodiment of the late-1980s ‘Big Bang’ that followed Margaret Thatcher’s shake-up of financial markets. During the pandemic, the firm also agreed to redevelop another Broadgate building that will be partly leased to real estate broker Jones Lang LaSalle Inc. Both projects replace outdated blocks vacated by lender UBS AG and inter-dealer broker TP ICAP Group Plc.

Reinventing tired office blocks might be in the DNA of developers like British Land, but it’s a new frontier for many of the pension funds, insurers and ultra wealthy investors who’ve banked on City buildings for their steady rental income and store of value.

The challenge for owners is that the pandemic has accelerated the pace at which buildings have become obsolete, according to Savills Plc Chief Executive Officer Mark Ridley. That’s because potential customers want the most up-to-date air conditioning, elevators and space that can adapt to the more flexible demands of a post-covid world, where the role of the office refocuses on collaboration and innovation. Less carpet and cubicles, more communal areas and break-out rooms.

“In the short term, I think there are quite a lot of pretty awful office buildings that will struggle because they just don’t fit the modern agenda,” said Nick Leslau, a veteran real-estate investor who made money from buying London offices cheaply after the financial crisis and then selling out to Blackstone Group Inc. “There will be pressure on rents because it is inconceivable that there will not be companies walking away from large spaces.”

The shift is well underway. City office vacancies have soared about 70% during the pandemic to more than 12 million square feet, according to Savills Plc, as the coronavirus spurred employers to rethink their real-estate needs. That’s the equivalent of two-dozen empty Gherkins.

The exodus is forcing the owners of some older buildings to think more radically. When Goldman Sachs Group Inc. moved its U.K. headquarters in 2019, the bank vacated 1.3 million square feet of buildings on or near Fleet Street, the area that once housed London’s newspaper industry. After weighing a refurbishment of the largest of those offices, its owner — billionaire Joseph Lau’s Chinese Estates Holdings Ltd. — has instead opted for a major redevelopment in a bid to find a new tenant.

The pressure on older buildings has also coincided with the halt to the expansion of WeWork, once an obvious savior for landlords with big empty buildings as it hoovered up millions of square feet of vacant space. The flexible office firm’s refocus on turning a profit had prompted it to pull out of several deals for new London buildings including Peterborough Court, the former Goldman Sachs office next door to Lau’s.

All four of the former Goldman blocks are owned by the kinds of overseas investors that came to dominate the City office market in the decade following the financial crisis, accounting for most of the roughly $13 billion poured into the district’s real estate each year. The ever-present tenant base sourced from the half-a-million workers that filled the district daily provided steady rental income and few headaches.

“Offices have been a great place for institutions to park money in the middle of the central business district; it is very passive, you don’t have to do much, you just collect the rent and re-do the lobby every five years,” Scott Crowe, chief investment strategist at Centersquare Investment Management LLC said. “The game has changed. Like the rest of real estate it requires more capital, more understanding of tenants, more technology.”

French insurer AXA SA’s investment unit has installed opt-in facial recognition machines to greet workers at its just-finished 22 Bishopsgate skyscraper, which is now the tallest building in the City. A recently approved tower by Hong Kong developer Tenacity that will neighbor the Walkie Talkie building promises green technology so efficient that tenants will get free cooling for most of the year.

Innovation will also play a greater part in the tenant mix. As part of British Land’s efforts to lure the technology firms that are now the City’s biggest source of growth, it’s replacing Broadgate’s fortress-like structures of glass and steel with open and accessible buildings, along with more bars, restaurants and public space. The company sees a far more diverse future for the City, with Broadgate tenants now including the likes of game manufacturer Product Madness and cyber-security firm Mimecast Ltd.

As Brexit collides with the impact of the pandemic, the City’s evolution will have to come fast. About 1.3 trillion pounds ($1.8 trillion) of assets have moved from London to various European Union hubs since the U.K. voted for Brexit. The capital has lost ground on both swaps and EU share trading since the rupture — and while the number of jobs that have moved to the continent is well short of original forecasts, they are small but growing.

And many wonder if adding millions of square feet of more space ignores permanent changes to where and how people work. Will this be a repeat of mall owners ignoring the rise of Amazon for too long? Landlords can tend to be blinded by group-think, says Liz Peace, former head of the British Property Federation and chair of the Real Estate Balance group, which pushes for diversity in the industry.

“There are a lot of people in real estate who do tend to be middle-aged or older white males who naturally assume everything is going to go back to where it was before.” Peace said.

While the City is stirring back to life, the district is far from resembling its pre-pandemic days of pavements thronging with workers and pub drinkers spilling on to the streets. Developers with skin in the game are sounding chirpier than people on the ground.

“It’s still pretty dead,” said Mridul Kalikota, owner of the V69 coffee kiosk beneath Commerzbank AG’s City headquarters who’s been serving the handful of traders that have come to the office throughout lockdown. “I don’t think it is going to go back to the same way it was. A lot of these people are six figure guys, they have nice home offices. Tuesday, Wednesday, Thursday it is a bit busier, but Mondays and Fridays the City is empty.”

Still, the continued easing of lockdown and success of the vaccine rollout may embolden the City of London Corporation, whose fervor for approving towers almost suggests it expects a busier district in the years to come. Seven of the planned skyscrapers cover more than half-a-million square feet, meaning the next decade would bring even more behemoths than the last 25 years did.

It’s all a wager that landlords’ exciting new buildings will lure employees back from their living rooms.

“They would say that, wouldn’t they?” Peace said. “Their business model depends on it.”

— With assistance by Samuel Dodge