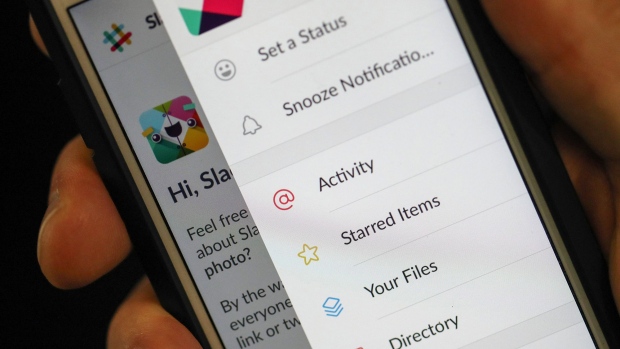 Slack Technologies Inc. shares rallied on Friday, extending a recent gain that has brought the software company to its highest level since September.

The stock gained as much as 6.9 per cent on volume that was above its daily average over the past three months. Shares are on track for their eighth positive session of the past 11 trading days, and have risen nearly 40 per cent from a closing low in January.

Even with the recent jump, however, the stock remains almost 30 per cent below a peak hit in June, shortly after its market debut.

On Monday, the stock closed up more than 15 per cent following a report that IBM was moving all employees to Slack’s platform. The company subsequently issued a statement that neither confirmed nor denied the report, but noted that “IBM has been Slack’s largest customer for several years and has expanded its usage of Slack over that time.”

Piper Sandler wrote that the report pointed to “broader enterprise adoption of Slack.”

On Thursday, Mizuho Securities lifted its price target by US$2 to US$22, citing optimism about the company’s upcoming fourth-quarter results. There is a “high likelihood” that Slack “will report meaningful upside to the Street’s billings and revenue estimates,” analyst Gregg Moskowitz wrote, though he reiterated his neutral rating, writing that he was “quite concerned with respect to Microsoft Teams as a competitive threat going forward.”

The comments were the latest in a series of positive commentary on the stock. Earlier this week, D.A. Davidson also raised its price target on the stock, and last week, Baird named the company a “tactical Fresh Pick,” writing that its growth-adjusted multiple was “among the most attractive in our coverage.” Separately, RBC Capital Markets last week forecast “durable, multi-year 30 per cent+ growth” at Slack, issuing an outperform rating on the shares.

Slack’s fourth-quarter results are scheduled to come out on March 12. Currently, Wall Street expects the company will report an adjusted loss of 6 cents a share; estimates for this metric have improved by 7.8 per cent over the past three months, according to data compiled by Bloomberg.