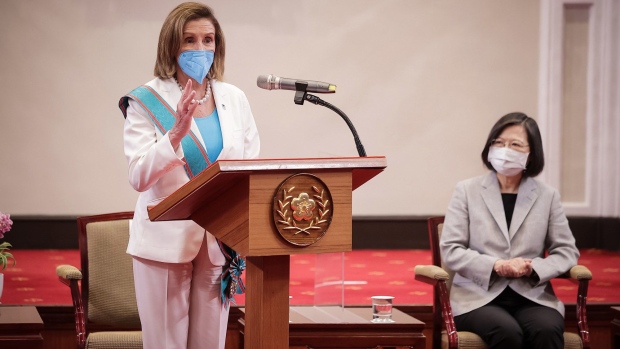 (Bloomberg) -- Almost everyone in Washington wants to be a China hawk now, making it a lonely town for some well-placed skeptics.

With US-China ties at a low ebb and Chinese President Xi Jinping securing a precedent-breaking third term in office, the Biden administration is maintaining its sharp-edged approach toward China with everything from new export controls on high-tech chips to warnings about a potential Chinese invasion of Taiwan.

The two governments’ muscular rhetoric is drowning out the concerns of some leading US specialists on China who aren’t dovish about Beijing’s behavior but are skeptical of the logic behind Washington’s increasingly aggressive analysis of Beijing as a threat -- and especially what they view as loose talk about the prospect of a military attack on the self-ruled island.

It’s a concern voiced, sometimes on condition of anonymity, by former government officials and by analysts who speak regularly with the Biden administration.

The hawkish narrative “limits room for maneuver in a crisis,” said M. Taylor Fravel, director of the Security Studies Program at the Massachusetts Institute of Technology. Any effort to defuse tension could be characterized as “conciliatory or not tough enough,” he said.

China has been consistent on Taiwan and there’s little public evidence to suggest it’s sped up the timeline to take Taiwan, said a former senior US official who worked on China policy but asked not to be identified.

The former official said the hawkish tone in DC has contributed to a cycle where the US makes the first move, interprets Chinese reactions as a provocation, and then escalates further.

The increasing likelihood that Republicans will win control of Congress in next week’s midterm elections brings the prospect of even more tension as GOP critics pursue their argument that Biden hasn’t been tough enough on China.

Unlike those espousing Washington’s increasingly hawkish consensus, these experts don’t believe that China is poised to seize Taiwan by force despite bellicose language. They say Beijing’s claims to Taiwan and vows for “reunification” have been consistent for years.

Although these people praise aspects of President Joe Biden’s approach to China, they say they worry the two superpowers are stuck in a cycle of recriminations and punitive actions that might hasten a crisis or conflict.

Open speculation by some US military brass that China may move to seize Taiwan by 2027, if not sooner, is based on China’s internal goal for military modernization -- 2027 is the centennial of the People’s Liberation Army -- or by strategists’ concern that US forces need to be ready soon to counter any such attack, according to Joel Wuthnow, a senior research fellow at the National Defense University’s Center for the Study of Chinese Military Affairs.

“People got obsessed with this 2027 date as if this was some sort of political timeline” for the Chinese Communist Party, “and I think it was mischaracterized,” Wuthnow said. “It’s about readiness. It’s about preparedness. It’s not about, ‘I have made a decision and you will do this in 2027.’”

Already, Biden has undercut the US’s long-time policy of “strategic ambiguity” regarding Taiwan on multiple occasions by pledging to defend Taiwan militarily. He also departed from the US policy of discouraging Taiwan from formally breaking with China by saying in September that “Taiwan makes their own judgments about their independence.”

Secretary of State Antony Blinken has also recently sharpened his tone on China, suggesting that China wants to “speed up” unification with Taiwan on a “much faster timeline,” without providing new details.

That messaging has spurred concern even among supporters of the administration approach. Such comments could “end up provoking the war that we seek to deter,” said Bonnie Glaser, director of the Asia program at the German Marshall Fund of the United States, who has advised the government on Asia policy.

Congress has led escalations including the Taiwan Policy Act -- which earmarks $4.5 billion for Taipei’s defense over four years -- and Nancy Pelosi’s trip to the island in August, the first by a House speaker in 25 years, which prompted China to launch military exercises around the island and fire missiles into Japanese waters.

From Beijing’s perspective, the US is changing the status quo with such moves. Xi’s government shows no signs of readying an invasion as it focuses on finding ways to tackle growing social problems at home and preventing Covid-19 from killing a relatively large group of unvaccinated seniors.

A Chinese diplomat in Washington said this week that Beijing has no timetable for unification with Taiwan and “we don’t want to use force.”

“Some people are talking about five years, ten years, 2035, 2049 -- I don’t think so,” Jing Quan, the No. 3 official at the Chinese embassy in Washington, said Wednesday in a speech to the Institute for China-America Studies.

But US perceptions cratered as Beijing militarized islands in the South China Sea during the Obama administration, initiated what human rights experts have called a genocide in its Xinjiang region and cracked down on Hong Kong’s independence.

The Biden administration inherited former President Donald Trump’s tough China policy -- including $300 billion in tariffs -- and has kept most of it in place.

The administration also has moved to sharpen export controls for advanced technology, including chips and possibly artificial intelligence, in an effort to hobble China’s ability to match American military and economic might.

The cycle of escalation by Washington and Beijing could worsen, especially if a planned meeting between Xi and Biden at the upcoming G-20 meeting doesn’t do much to calm tensions.

“I do not expect US-China relations to improve,” said Fravel, of MIT. “The only question is how much further they will deteriorate and if the relationship will shift from one of competition to one of hostile confrontation.”

(Updates with comment from former US official in 6th paragraph. A previous version of this story was corrected to show Glaser supports the administration’s approach toward China even as she questions the clarity of its policy toward Taiwan.)