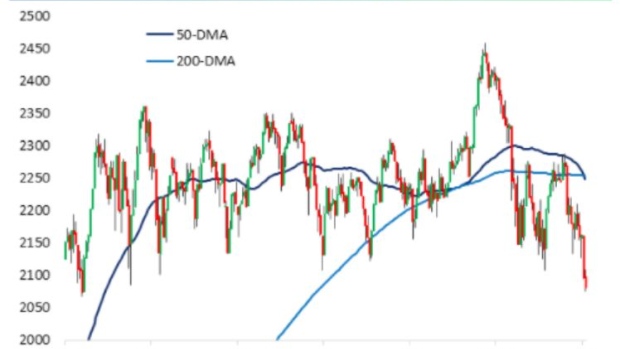 (Bloomberg) -- An ominous-sounding technical formation is staring down the Russell 2000.

The small-cap gauge fell as much as 1.1% Wednesday, with its average price over the last 50 days dipping below the 200-day moving average. When that happens and both moving averages are on a decline, it’s a technical pattern known as the “death-cross.”

“Death crosses are often interpreted as a bearish chart pattern,” Jake Gordon, an analyst at Bespoke Investment Group, wrote in a note.

Smaller firms have been under pressure because they’re very interest-rate sensitive and their cost of capital increases as yields rise, said Jamie Cox, managing partner at Harris Financial Group.

“When interest rates were uber low, it really was beneficial for them,” Cox said. And “coming off the really low interest rates to somewhere where we are now, that does cut their earnings potential.”

Biotech companies constitute a majority of the laggards within the Russell 2000, he added.

“Those companies were incredibly overpriced,” Cox said. “So you take the two of those things together -- where the cost of capital goes up and the premium that was assessed to every biotech that could be the next Covid lottery ticket, that premium gets the air taken out of it.”

Still, according to Bespoke, the pattern might not be as foreboding as it sounds. In data going back four decades, the Russell 2000 has declined a median of 0.9% in the week after a death-cross, while over longer periods of one and three months it has gained more than half the time, Gordon wrote.

“Death crosses are considered to be a negative technical formation, but the performance of the Russell 2000 following prior occurrences, while not better than average, has been hardly as scary as the name of the pattern implies,” he said.