Investors are learning that online advertising stocks may be just as vulnerable as old-school media companies amid a looming potential economic downturn.

Concerns over the sector have grown since Snap Inc. slashed its forecast in May, warning that a weaker economic outlook was weighing on its ad business. That sparked a selloff of more than 40 per cent, its biggest one-day drop ever, and the stock is now down about 70 per cent in 2022. The parent of Snapchat releases second-quarter results Thursday after the market closes.

Facebook parent Meta Platforms Inc. is down almost 50 per cent this year, as is ad-tech provider Trade Desk Inc. The losses have come as the Federal Reserve aggressively raises interest rates to combat inflation, weighing on the growth outlook. The Nasdaq 100 Index is down about 25 per cent in 2022.

While the industry has benefited from the long-term tailwind of ad spending shifting to digital from print and broadcast, the growth in publicity budgets is likely to take a hit as business gets tougher. In addition, higher rates have hurt the valuations of companies that are priced based on expected growth far out in the future, while social-media stocks also have been struggling against a changed privacy policy at Apple Inc. that has diminished their ability to target ads.

“There are still too many headwinds to get excited in the near term,” said Jordan Kahn, chief investment officer of ACM Funds. “Overall, you’re going to need to see a new upcycle for earnings before these names start moving higher.”

Industry watchers already are cutting their forecasts for this year. GroupM, a media investment company, expects ad revenue growth of 8.4 per cent, excluding US political ads. That’s slower than the 24.3 per cent pace set in 2021, and down from the 9.7 per cent that GroupM expected for 2022 at the end of last year.

While the onset of the pandemic triggered a recession in 2020, that was a brief, one-time shock, caused by an outbreak that kept people at home and in front of their computers -- a favorable environment for online businesses. A 2022 recession, should one hit, will be a classic cycle: Rapid growth and inflation prompts higher interest rates, cooling the economy and causing advertisers to cut their spending.

Most of the companies that dominate online advertising went public after the Great Recession of 2008-2009, so investors are getting their first taste of how well their businesses and share prices will hold up in a tough economy. One exception: behemoth Alphabet Inc., which went public as Google Inc. in 2004. The stock lost two thirds of its value from the peak in late 2007 to the bottom a year later.

Kahn singled out Trade Desk as a stock that still looks risky despite strong long-term prospects; it trades at almost 45 times estimated earnings. “Even though it has beaten expectations for several straight quarters, that’s still a premium valuation for a bear market,” he said.

There is one ad stock that Wall Street remains almost unanimously favorable on: Alphabet. The Google parent has nearly 100 per cent buy ratings among analysts, who note steady demand for its search and YouTube businesses, along with a stock trading at less than 17 times estimated earnings, a multiple that’s below its long-term average and the market overall.

“The valuation is not at all demanding for such a great company,” said Aaron Dunn, who oversees more than US$4 billion at Eaton Vance Management. He said other stocks in the sector continued to look more speculative, even as he expects advertising to continue shifting online over the long term.

“Online ads are here to stay and likely to grow,” he said. “That said, the trend over the past year or two was unsustainable, and we’re getting payback for that today.” 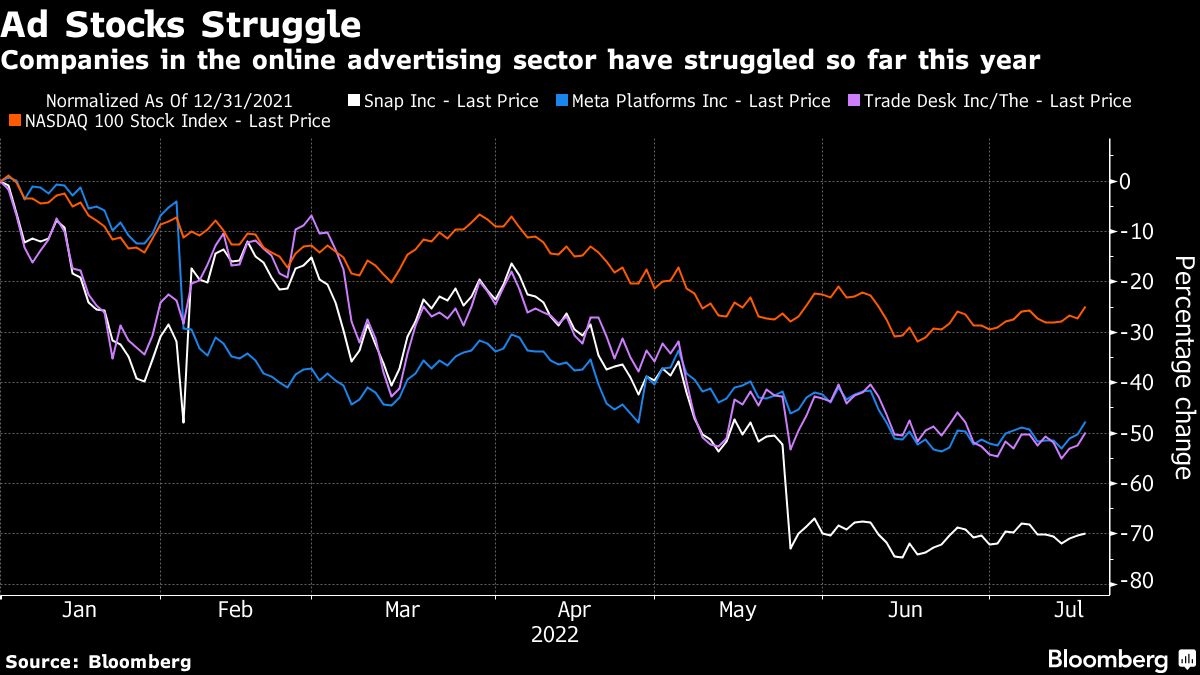 Shares of Netflix Inc. rose 7 per cent in premarket trading Wednesday after the video-streaming giant reported that it lost fewer than half the number of customers that analysts had estimated it would shed. Through Tuesday’s close the Los Gatos, California-based company was this year’s worst-performing stock in both the S&P 500 and the tech-heavy Nasdaq 100 by a wide margin. If premarket gains hold, Netflix will still be down about 64 per cent this year, topping losses by Etsy Inc. in the S&P 500 and Align Technology Inc. in the Nasdaq 100.