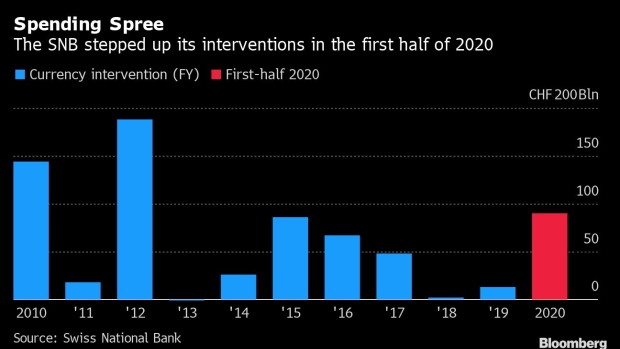 (Bloomberg) -- Swiss National Bank President Thomas Jordan has reason to expect a less intense 2021 after a multi-billion currency battle this year that put Switzerland in the crosshairs of U.S. authorities.

The combination of a landmark European Union fiscal package and the anticipated global economic recovery driven by the rollout of Covid-19 vaccines will likely dampen demand for haven assets such as the Swiss franc, and a survey sees the currency weakening through 2021.

That should bring relief for Jordan ahead of the last scheduled policy decision of 2020 on Thursday. It means the SNB won’t have to dig as deep as it did this year to prevent the currency from appreciating, spending 90 billion francs ($102 billion) in the first half alone in an escalation of its seemingly endless currency fight.

Jordan’s actions have raised red flags at the U.S. Treasury, and Switzerland is set to meet its criteria for currency manipulation, though it could dodge the label.

Still, the SNB will probably reiterate its pledge to intervene in currency markets if needed on Thursday. Alongside that, the main policy rate is expected to stay at a record-low -0.75%.

“There are fewer global political risks, so maybe 2021 will be -- I hope --a better year for the SNB,” said Nadia Gharbi, an economist at Pictet & Cie in Geneva. “If Europe does well, in principle that helps Switzerland and the pressure on the franc gets less strong.”

Consumer prices are falling and Jordan has never ruled out another rate cut if needed, but that wouldn’t go down well with banks. They’ve long complained about the impact of negative rates on their business. The SNB toolkit is also constrained by the fact that the domestic bond market is too small for a quantitative easing program.

“The SNB is certainly between a rock and a hard place,” said Gero Jung, an economist at Mirabaud & Cie. “What possibilities do they have?”

Jordan and his compatriots Fritz Zurbruegg and Andrea Maechler can take some comfort from the fact that the Swiss economy has taken less damage from the pandemic than neighbors France and Italy.

On top of that, their 2020 currency battle won’t have to be repeated if forecasts are correct. The franc may weaken to 1.11 per euro in 2021 from 1.07 currently, according to a Bloomberg survey. It touched 1.05 during the early outbreak of the pandemic, the strongest in five years.

Still, there’s much that can go wrong, including issues with vaccine deployment. The euro area’s long-existent handicaps -- high unemployment and government debt, feeble productivity growth -- will drag on the bloc.

Better euro-area growth should “help the euro as of mid-year and slightly weaken the safe haven franc,” said Alessandro Bee, an economist at UBS in Zurich. But it’s “fraught with uncertainties,” he said.