How cannabis brought Martha Stewart and Snoop Dogg closer together

Oxford Cannabinoid Technologies, the U.K. prescription drug company that counts rapper Snoop Dogg among its investors, swung wildly between gains and losses on its London stock-market debut, capping a volatile week for investors.

The stock opened 50 per cent higher, but then reversed the advance to fall as much as 15 per cent, before trading up one per cent at 5.05 pence as of 1:25 p.m. in London. 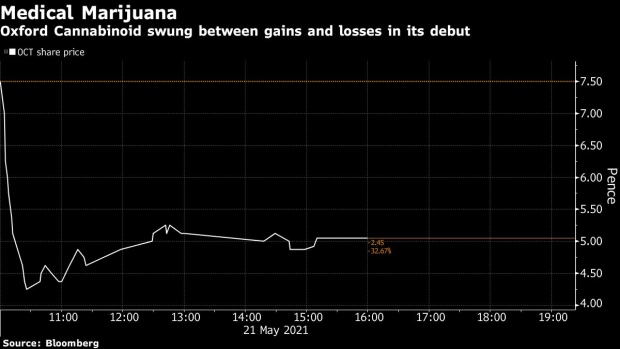 Oxford Cannabinoid -- known as OCT -- had a market capitalization of 48.5 million pounds (US$68.8 million) at the start of trading. Imperial Brands holds about 11 per cent of the company’s share capital, while Casa Verde Capital LLC -- the California-based venture firm where Snoop Dogg is a partner -- has a stake of around two per cent, according to the IPO prospectus.

The listing comes after a series of initial public offerings in Europe got a lukewarm reception from equity investors in a rollercoaster week for global stock markets.

Software developer SUSE SA, which debuted in Germany on Wednesday, fell as much as 11 per cent, before recovering to end its first day of trading slightly above the IPO price. Semiconductor company Alphawave IP Group Plc sank almost 10 per cent in its first session in London last week.

OCT is hoping to emulate the success of GW Pharmaceuticals Plc, a British company that made the first drug wholly derived from the cannabis plant to win U.S. FDA approval. It was acquired by Jazz Pharmaceuticals Plc for US$7.2 billion this year.

The U.K. has attracted a number of companies active in the cannabis field, including Cellular Goods Plc, which also has a celebrity backer in soccer star David Beckham.

The U.K. “is now open to cannabis companies and being based both in London and Oxford, our DNA is very British,” Chairman Neil Mahapatra said in an interview with Bloomberg Television about the company’s decision to list in London.

OCT, which develops cannabinoid-based prescription medicines, raised 16.5 million pounds (US$23 million) from wealthy individuals and institutional investors in its placing.

“London has been incredibly forward-thinking in now opening up to the right type of professionally run medical cannabis firms,” Mahapatra said.