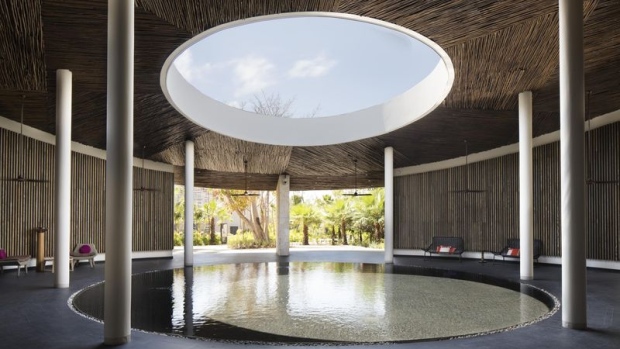 When Upper East Siders Adelle and Robert Rathe boarded a flight to Saint Martin in mid-January, they left behind a typically cold New York day. By the time they return from their resort getaway in mid-April, the trees in Central Park will have started to bloom.

The Rathes are hardly the first weather-worn Northeasterners to trade puffy coats and slushy sidewalks for bathing suits and white sand. And although they once considered buying property on the Caribbean island they’ve fallen for over the decades, they’ve found something even better to splurge on: about 90 consecutive nights at Belmond La Samanna, a luxury resort that reopened in December after a US$25 million renovation.

“A lot of our friends wonder what we pay,” Adelle jokes. “I tell them they can find out by calling the hotel.” (Run math based on the hotel’s starting rate of US$545 per night, though, and the pair is likely looking at a deep-five-figure bill—minimum—before adding any food, drinks, or activities.)

This twist on the snowbird lifestyle—which trades seasonal vacation homes for no-expenses-spared resort stays—is becoming increasingly popular among the retirement jet set, according to industry insiders.

“Those who choose luxury resorts over real estate purchases such as a condo or home do so not only for the five-star pampering and attentive service, but also the flexibility of choice,” says Tara Hyland, a Virtuoso-affiliated travel adviser who has booked several such stays for clients. “Of course, spas, yoga classes, fitness programs, water sports, golf, tennis, and restaurants make resorts even more attractive.”

Better Than a Vacation Home

Although choosing a resort over real estate means you’re not tied down to any one destination, many long-term hotel guests return to the same place year after year. The Rathes, for instance, have spent nearly every winter at La Samanna since 2001.

In such cases, a resort can start to feel like a proper vacation home—albeit with less upkeep, more amenities, and one annual payment, instead of 12. “Owning a house is a responsibility. The security, the constant work—you’re a slave to it,” says Adelle, who is retired, speaking from the resort while a polar vortex pummeled her Manhattan home. “Here I’m 150 feet from the water, and I can get anything I want in five minutes.”

Others, such as Judy Wyatt, who have just started to dip their toes in the (blue) waters of hotel living, are already seeing comparative benefits over second homeownership.

Newly retired and determined not to spend the colder months in Ohio, Wyatt booked a cottage for five weeks at Sea Island, a resort in coastal Georgia, with Luke, her 11-year-old golden retriever, and Annie Mae, her one-year-old cat. In addition to regular beach strolls with the pup, she took full advantage of the on-site activities such as cooking demos, a “hawk walk” with a professional falconer, and spa appointments—all things that would have been difficult to arrange outside a resort environment.

“If I wanted to fill every hour of the day, I could,” she says.

The “built-in social scene” of a hotel is a further clear benefit, according to Montrealers Stephen and Brenda Leopold. At their winter-long Andaz Mayakoba getaway in eastern Mexico, the real estate entrepreneur and his wife know they’ll swap evening stories with well-heeled guests. A vacation home might mean nagging neighbors, or worse, a curmudgeonly president of the condo association.

“A hotel offers the opportunity to meet people who are exceedingly interesting,” says Stephen, who is currently in the midst of a 16-week stay in the same beachfront room he booked last year. “It could be a world-renowned cardiologist one day, and two days later it could be an author. There are so many fascinating people who cycle through.”

Free daily housekeeping, a full staff to call on, and activities galore: all sweet perks for guests, sure. But extended stays are a gold mine for hotels, too.

Besides the big-ticket nature of these stays, snowbirds give resorts an edge when it comes to revenue forecasting, says Hyland, the travel specialist. In other words, the longer the stay, the easier it is for a hotel to predict spending habits—especially if they’ve been coming for years—and the more they’ll likely spend on ancillary services. “Seasonal guests are usually an excellent source of referrals. They may have visiting family and friends who add more room nights, more revenue, and more business for the spa, golf, and restaurants.”

Indeed, the Leopolds’ 30-year-old twin sons are no strangers to Mayakoba. (“I’m a points gazillionaire,” jokes Stephen of his World of Hyatt status.) And when the Rathes’ two children and five grandchildren travel to Saint Martin, as they have done regularly over the years, the entire crew moves into a three-bedroom villa, plus a room next door.

That puts them squarely among the hotels’ most profitable and important guests. The Leopolds know their room will always be freshened according to their preferences: additional towels and bottled water, with tissue boxes and sunscreen positioned just so.

“The mentality at any good hotel is that the guest is always right. Put that together with being the best guest, and they cannot do enough for you. If I wanted to eat a filet of Canadian moose meat three nights a week, I’m convinced they’d find a way to get it to us,” says Stephen.

“While it is our pleasure to look after all our guests in equal manner, there is always something special about these types of long-stay guests,” says Pascal Dupuis, the general manager at Andaz Mayakoba. “They become part of the family; a different bond emerges.”

With nightly rates at these properties starting at US$200—and often costing upward of US$750—snowbirding at a resort year after year can easily cost more than a down payment on a beachside villa. Still, it’s not as financially reckless as it sounds.

According to real estate consultant Jonathan Miller (a former Bloomberg columnist), the real estate market is softening in many seasonal-stay destinations, largely due to the advent of services such as Airbnb and Onefinestay. And monetizing a vacation home through these services isn’t for everyone. In cases in which properties sit dormant for months, owners can end up wildly out of pocket, particularly when you factor in down-payments, renovations, insurance in hurricane-prone markets, monthly parking or homeowners association dues, taxes, and other costs.

“There’s no way it makes sense to own an apartment unless you’re spending a significant amount of time there,” adds Miami-based Merrill Lynch financial advisor Patrick Dwyer about South Florida, largely considered the country’s snowbird mecca. “But even then, you’re still losing. The myth that you’re going to make money on your property is just that. Interest rates are going up, which makes the opportunity for your capital investment in real estate more challenging. Being able to go from resort A to resort B is better than locking into a fixed cost as you get older.”

With that in mind, the Leopolds have no doubt about what next winter will bring. “We intend to come back here: in the same way, in the same room, and living the same life,” Stephen says.

The Rathes will boomerang back to Belmond La Samanna, and Sea Island will welcome a repeat guest in Wyatt, as well.

“Before I retired, we drove to either Florida or South Carolina—but always just for a week or two,” she says. “Now that I’m able to make the trips longer, next year I think I’ll do three months. Before you know it, I’ll probably live here.”