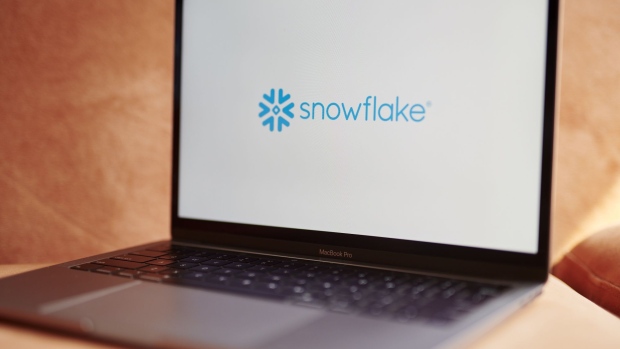 Snowflake Inc. signage is displayed on a laptop computer in an arranged photograph taken in the Brooklyn borough of New York, U.S., on Wednesday, Sept. 16, 2020. Snowflake Inc. soared in a euphoric stock-market debut that transformed the eight-year-old software company into business valued at about $72 billion. Photographer: Gabby Jones/Bloomberg , Bloomberg

(Bloomberg) -- Snowflake Inc. jumped more than 10% in extended trading after the cloud software company reported better-than-projected revenue and a bullish forecast, fueled by a gain in new customers.

Product sales, which make up more than 90% of Snowflake’s revenue, will be $345 million to $350 million in the period ending in January, the company said Wednesday in a statement. Analysts, on average, estimated $317.4 million, according to data compiled by Bloomberg.

Total revenue more than doubled to $334.4 million in the fiscal third quarter, which ended Oct. 31, also topping projections. And the company narrowed its net loss from the period a year earlier.

Snowflake came to prominence in September 2020 with the biggest U.S. initial public offering of the year, and the largest ever for a software company. Since reaching a record share price of $401.89 in mid-November, the stock has tumbled, closing at $311 Wednesday in New York and leaving it up just 11% in 2021.

Snowflake makes software that pulls and compiles information from different systems so clients can analyze it together in the same place. The company modernized the data warehouse, an architecture made popular by the likes of Oracle Corp. that has been around for decades. Snowflake is benefiting from companies seeking ways to manage and analyze ever-increasing volumes of information from multiple locations.

The company said it had 5,416 customers at the end of the quarter, a 9% gain from the previous period. Snowflake’s largest clients, those who generated trailing 12-month product revenue greater than $1 billion, increased to 148 from 116 in the previous quarter.