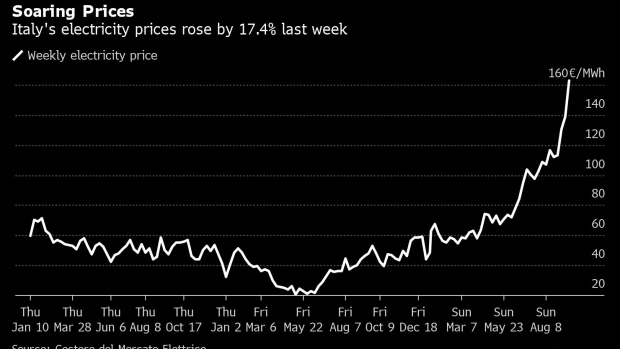 The average weekly price of power soared 17% to 163 euros ($191) per megawatt-hour last week, according to data from the country’s Energy Market Manager. Power prices are expected to climb 40% in the third quarter, Ecological Transition Minister Roberto Cingolani said last week.

The government has spent 1.2 billion euros ($1.4 billion) to reduce the affect of rising prices in the second quarter. Premier Mario Draghi is ready to intervene again with another 3.5 billion euros to reduce the impact on consumers’ electricity bills.

Soaring prices in Italy are part of a rally across Europe, where German and French electricity costs for next year have surged to records. Italian year-ahead power futures traded at 116.85 euros a megawatt-hour on Tuesday, more than double the rates at the start of the year on the European Energy Exchange.

The price gains follow an increase in global demand after the pandemic, while stubbornly low European gas inventories and low coal stockpiles have pushed up fuel costs. The impact is set to grow during the looming cold season.

Italy is particularly vulnerable as it relies on imports to meet over 70% of its energy needs, with almost 40% coming from natural gas.