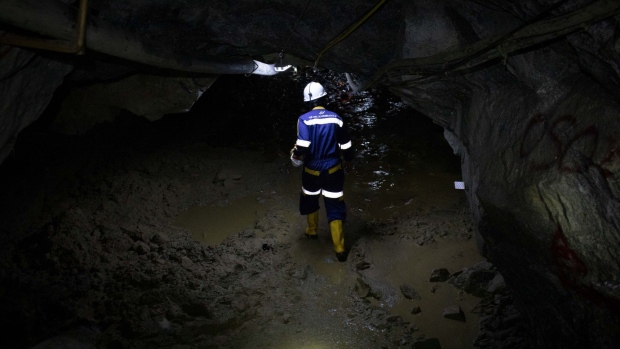 A worker walks through mud inside the Gran Colombia Gold Corp. mine in Segovia, Colombia, on Monday, Jan. 27, 2020. The Canadian-based Gran Colombia produced nearly 240,000 ounces of gold through 2019, up 10% from 2018. Photographer: Nicolo Filippo Rosso/Bloomberg , Bloomberg

(Bloomberg) -- Gold miners are forging ahead with mergers and acquisitions, taking advantage of an investor flight to the haven during the coronavirus crisis.

Despite the logistical problems the pandemic has created -- both for operations and for arranging face-to-face meetings to hammer out transaction details -- consolidation is picking up steam with three proposed gold deals announced in the last week.

That’s in contrast to broader M&A activity across the globe, where almost $16 billion of mergers, acquisitions and investments have been terminated over the past 30 days. The gold industry is bucking that trend as investors rush to bullion while fleeing risk assets including equities and oil.

Spot gold prices have climbed more than 12% so far this year. That follows an 18% gain last year, on broader global growth fears, which had helped drive a series of deals in the last six months.

SSR had been looking at potential opportunities for five years, CEO Paul Benson told analysts, and he and Antal were able to meet face-to-face before lockdowns. They continued negotiations from afar as the virus spread. “It hasn’t actually impacted this deal; we’ve done everything remotely,” he said.

The $1.7 billion all-stock deal is a zero-premium merger of equals that will offer increased liquidity and scale for investors, according to the companies. It comes at a good time with heightened interest in gold driving prices higher, Benson said.

Tie ups between smaller miners are accelerating after 2019 marked a bumper year for gold deals, which kicked off with a $10 billion mega-merger between then Newmont Mining Corp. and Goldcorp Inc.. The trend picked up steam in the second half of last year as mid-tier and junior miners played catch-up.

Just last month, Newcrest, Australia’s top gold producer, said it plans to raise as much as A$1.1 billion ($720 million) in a share sale to accelerate its growth pipeline and extend its cash flow exposure to a key mine in Ecuador. The company agreed to pay $460 million to buy a gold financing package for Lundin Gold Inc.’s Fruta del Norte mine and will also use the funds to push ahead with projects in Canada and Australia.

“Fundamentally, we view the transaction favorably given it is expected to create a stronger combined company with increased scale, strong free cash flow generation, and a robust balance sheet,” Mark Mihaljevic, an analyst with RBC Dominion Securities Inc., wrote in a note of the SSR-Alacer deal.