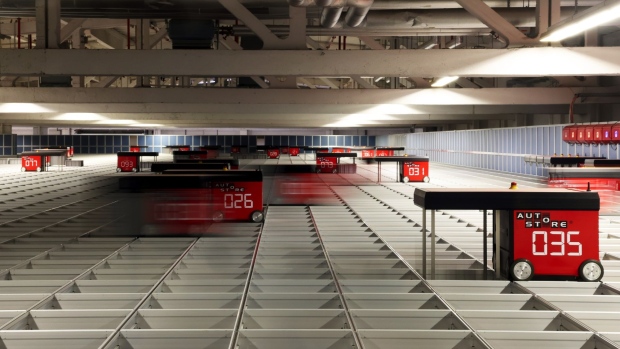 (Bloomberg) -- Robotics firm AutoStore seeks to raise $315 million on the Oslo Stock Exchange in an initial public offering amid a rush of Nordic listings.

Alongside a sale of new shares, holders will also offer existing stock, according to a statement on Tuesday. AutoStore, which is owned by private equity firm Thomas H. Lee Partners, SoftBank Group Corp. and EQT AB, could be valued at more than $10 billion in an IPO, Bloomberg News reported in June.

The offering adds to a rush of Nordic companies going public this autumn, including investment company Storskogen Group, car-glass repair business Cary Group and scam-call blocker Truecaller. Depending on the size of the stakes to be sold in the offering, AutoStore could rank among Oslo’s biggest-ever IPOs.

AutoStore expects that demand for robotics will continue to grow strongly for a long period, as currently only 15% of warehouses are automated, according to Chief Executive Officer Karl Johan Lier.

“This will increase strongly in the decades to come. Therefore we will be in a strong growth market,” he said in an interview on Bloomberg TV.

Founded in 1996, the Norwegian company sells robots used in the storing and retrieval of goods in warehouses. It was acquired by THL Partners in 2019 from EQT AB. SoftBank then bought a 40% stake in AutoStore at a $7.7 billion valuation in April.

The company has operations and installations in over 35 countries around the world with an installed or contracted base of 667 systems. It reported sales of about $150 million in the first half of 2021, up 88% from the same period the year before.

Following an internal reorganization prior to the IPO, AutoStore will be directly or indirectly owned by Thomas H. Lee Partners, SoftBank and EQT, as well as employees of the firm.

(Updates with CEO comments from the fourth paragraph.)