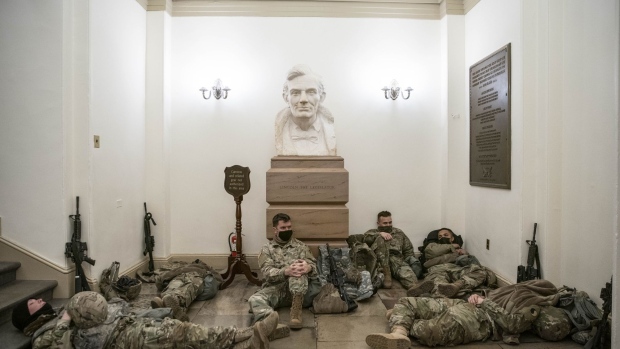 Members of the National Guard walk outside of the U.S. Capitol building in Washington, D.C., U.S., on Wednesday, Jan. 13, 2021. The U.S. House prepared to vote on a history-making second impeachment of Donald Trump as lawmakers seethed over his role inciting last week's mob attack on the Capitol and the president’s once-firm control over the Republican party began to break down. , Bloomberg

(Bloomberg) -- Soldiers took up positions in the U.S. Capitol in a scene reminiscent of Civil War deployments as Washington braced for the inauguration of a new president and a vote to impeach the current one.

With more than 20,000 National Guard units summoned, the Capitol and its park-like campus resembled an armed camp, with rifle-bearing soldiers standing at arm’s length from one another, and heavy military trucks blocking roads. The city itself contended with a wide perimeter of closed streets.

This comes after last week’s invasion of the Capitol by supporters of President Donald Trump, which left five people dead. The U.S. Secret Service began what it calls National Special Security Event operations for the 2021 Inauguration on Wednesday, rather than the earlier scheduled date one day before the Jan. 20 inauguration of Democrat Joe Biden.

“There’s a major security threat,” said D.C. Metropolitan Police Force Chief Robert Contee III. Asked about whether he had experienced such precautionary measures before, he replied, “Not at this level, no.”

Contee said “somewhere upwards, beyond 20,000 members of the National Guard” are being called to take up positions in the city. Security steps could extend to the Metro subway system, Mayor Muriel Bowser said without supplying details.

“We should ask D.C. residents to expect some impacts to transportation. That includes Metro,” Bowser said. “Our hotels are very concerned” and some may close for safety reasons, she added.

Airbnb Inc. said it will cancel all reservations in the Washington area next week during the inauguration and will prohibit any new rentals from being made, moves designed to minimize the possibility of further attacks at the capital.

Bowser has encouraged people to watch the inauguration from home instead of visiting.

And in places usually teeming with tourists in less stressful times, scores of troops slept on the floor and in hallways of the Capitol. It could be a first since 1862.

“There have been other instances of soldiers being assigned to protect the Capitol, but the Civil War is the only time we know of in which they quartered there,” said Samuel Holliday, director of operations and scholarship at the U.S. Capitol Historical Society, the nonprofit that promotes the history of the Capitol and Congress.

On Aug. 31 of that year, the headquarters of the Military District of Washington requisitioned the Capitol for use as a hospital after a battle, according to a blog post by the office of the architect of the Capitol. The Union had suffered 16,000 causalities and was in desperate need of places to care for the wounded.

Beds were setup in the Rotunda, the Old Hall of the House (now known as National Statuary Hall) and the corridors. The Commissioner of Public Buildings, Benjamin Brown French, estimated between 1,100 and 1,200 sick and wounded soldiers were brought to the Capitol and sentries were placed at every door.

“Besides the field hospital, there were also units of healthy soldiers quartered in the building not only to protect the Capitol but to protect the Union,” Holliday, the historian, said in an email.