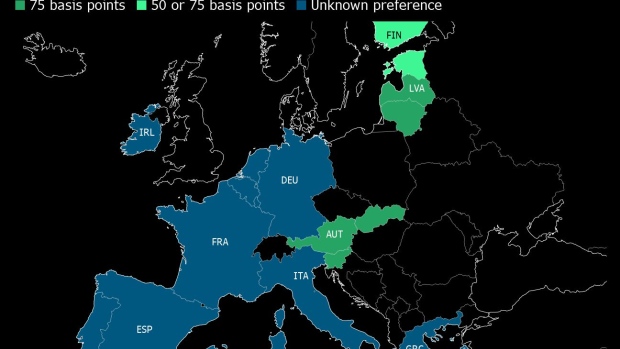 The River Main near the European Central Bank (ECB) headquarters in Frankfurt, Germany, on Thursday, Sept. 8, 2022. The ECB is on the brink of a jumbo three-quarter-point increase in interest rates to wrest back control over record inflation, even as the risk of a euro-zone recession rises. , Bloomberg

(Bloomberg) -- Some European Central Bank officials preferred lifting borrowing costs by 50 basis points in September, according to an account of their most-recent policy meeting in September.

The summary, released Thursday -- three weeks before the ECB next sets interest rates -- showed that decision makers ultimately joined a consensus on the three-quarter-point hike they announced amid “broad” agreement that rates were still accommodative.

Momentum is building for a repeat of the three-quarter-point rate hike officials delivered last month, with hawks publicly advocating such a step and money markets betting on it. But while that would go some way to tackling record inflation, which is nearing 10% in the 19-member euro zone, it risks worsening a looming downturn in the currency bloc’s economy.

The ECB’s full account can be found here. Below are extracts on some of the key policy areas.