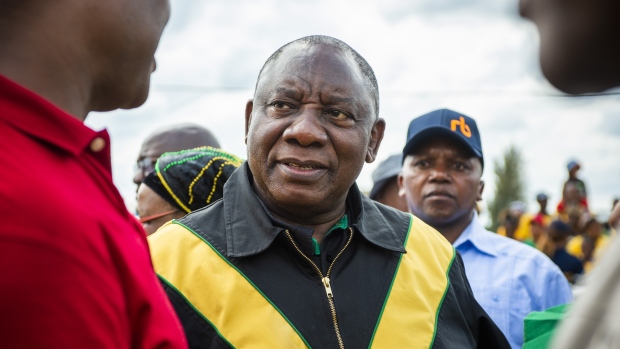 (Bloomberg) -- South African President Cyril Ramaphosa delayed until later this week introducing the members of his new cabinet, according to a statement Sunday from his office.

Ramaphosa was sworn in as president on Saturday, marking the official start of his five-year term and setting the stage for the cabinet appointments. The announcement had been expected Sunday or Monday.

“The presidency wishes to advise that the announcement will be made later in the week,” according to the statement.

Ramaphosa took office 15 months ago when the ruling African National Congress forced Jacob Zuma to step aside. The ANC’s outright victory in May 8 elections assured Ramaphosa of reappointment by the National Assembly, and lawmakers unanimously elected him to the post last week.

Finance Minister Tito Mboweni is likely to retain his post in the new cabinet. It’s unclear, however, who Ramaphosa will name as his deputy, with incumbent David Mabuza having delayed his appointment to the legislature.

Mabuza, who’s been linked to a series of scandals but denies wrongdoing, has said he first needs to defend himself against allegations made by the ANC’s integrity committee that he brought the party into disrepute. Ramaphosa’s second-in-command must come from among the ranks of the 400-member National Assembly.

To contact the reporter on this story: Amogelang Mbatha in Johannesburg at ambatha@bloomberg.net

To contact the editors responsible for this story: Steve Geimann at sgeimann@bloomberg.net;Matthew G. Miller at mmiller144@bloomberg.net