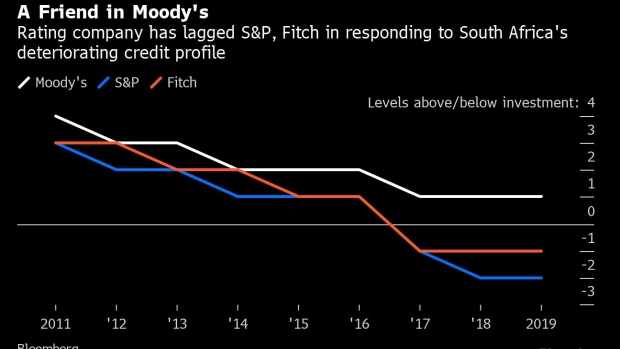 (Bloomberg) -- Investors may be forgiven for wondering what’s taking Moody’s Investors Service so long to downgrade South Africa to junk.

Financial markets have been pricing in a downgrade for months, and the two other major rating companies have had South Africa on junk for two years. Yet Moody’s said this week South Africa’s investment rating is probably safe for another 12 to 18 months and President Cyril Ramaphosa’s government needs time to implement economic reforms, including fixing the loss-making power utility Eskom Holdings SOC Ltd.

“Moody’s continues to give the Ramaphosa government the benefit of the doubt,” said Jakob Christensen, a Copenhagen-based economist at Danske Bank A/S. “A critical part of the reform agenda is Eskom and here Moody’s will await the government plan for the company. If the plan is not forthcoming or is found insufficient, I think the rating agency will pull the trigger and downgrade South Africa to junk.”

Moody’s is the only major company to rate South Africa’s debt at investment grade after S&P Global Ratings and Fitch Ratings cut their assessments to junk in 2017.

“They have also become convinced that plans to stop the erosion of public finances will be implemented, which is a big or daring assumption to make,” he said.

To contact the reporter on this story: Colleen Goko in Johannesburg at cgoko2@bloomberg.net