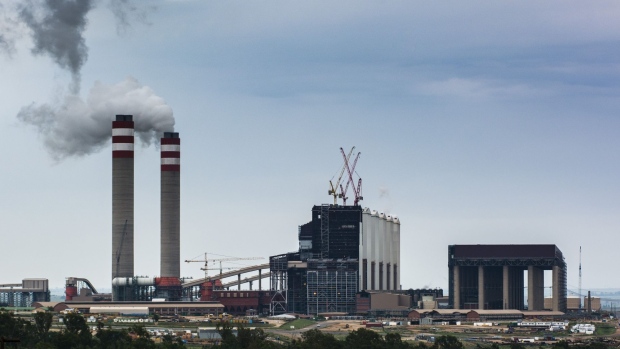 Emissions rise from towers of the Eskom Holdings SOC Ltd. Kusile coal-fired power station in Mpumalanga, South Africa, on Monday, Dec. 23, 2019. The level of sulfur dioxide emissions in the Kriel area in Mpumalanga province only lags the Norilsk Nickel metal complex in the Russian town of Norilsk, the environmental group Greenpeace said in a statement, citing 2018 data from NASA satellites. , Bloomberg

Eskom, which supplies nearly all of the nation’s power, will cut 2,000 megawatts from the grid from noon on Thursday through Sunday evening, it said in a statement. In addition, Kusile, its newest facility that’s over budget and not yet fully built, experienced an outage after the failure of a conveyor belt supplying coal to two units.

Unplanned breakdowns at Eskom’s Kriel and Duvha plants and delays in restarting other units contributed to the shortfall, it said.

The utility, which is also facing acute financial issues and operating at a loss, is in the midst of transforming the business into three separate units to add outside power producers as well as beginning a move away from coal as its main fuel.

Operational issues have plagued even what’s regarded as Eskom’s most reliable plant. The utility was forced to shut a unit earlier this month at the Koeberg nuclear facility near Cape Town.