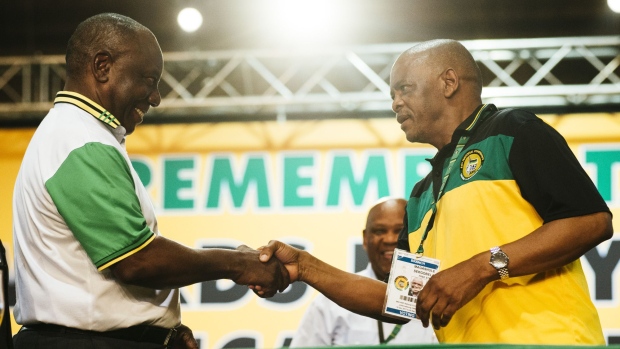 (Bloomberg) -- South Africa’s ruling party is considering changes to its constitution to automatically expel members charged with serious crimes to increase accountability within its ranks.

The African National Congress may revoke the membership of those found guilty of murder, rape, crimes against women and children and other wrongdoings, according to a 43-page internal document seen by Bloomberg News.

The move comes as South Africa’s governing party since the end of White-minority rule in 1994 works to revamp its image to retain the support of disgruntled voters. Some of the party’s top leaders face criminal charges before the courts, while a lack of basic services and high unemployment are further marks against its record ahead of the next national election in 2024.

Former President Jacob Zuma has spent many years defending himself against allegations he took bribes in relation to a weapons tender in the 1990s. He has denied any wrongdoing and appealed all rulings against him.

The party’s suspended Secretary-General Ace Magashule is fending off money laundering charges and President Cyril Ramaphosa is currently embroiled in a scandal that has weakened him politically, following allegations he concealed the theft of cash at his private game farm. Ramaphosa has denied any wrongdoing.

Changes to the ANC’s constitution will require support from two-thirds of delegates at it’s elective conference in December, at which Ramaphosa is expected to stand for re-election. The idea is to beef up a so-called step-aside rule, which compels indicted officials to give up their roles pending the outcome of legal proceedings.

The rule has already been challenged by two of the party’s largest provincial structures and is likely to dominate discourse at the conference.