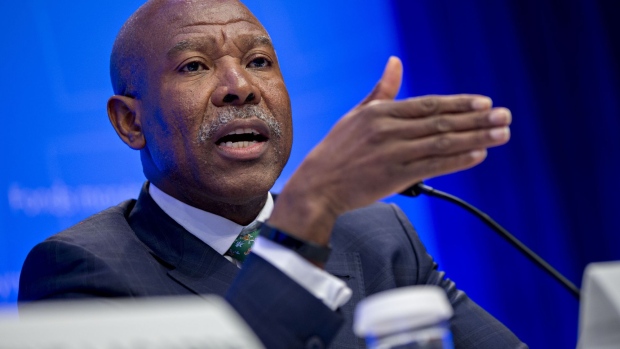 Lesetja Kganyago, governor of South Africa's reserve bank, speaks during a International Monetary Fund Committee (IMFC) news conference at the spring meetings of the International Monetary Fund (IMF) and World Bank in Washington, D.C., U.S., on Saturday, April 21, 2018. The IMF said this week the world's debt load has ballooned to a record $164 trillion, a trend that could make it harder for countries to respond to the next recession and pay off debts if financing conditions tighten. , Photographer: Andrew Harrer/Bloomberg

While current monetary policy stance is appropriate given the outlook for prices, there are risks on the horizon including higher energy costs and realigning exchange rates that could stem from policy tightening in advanced economies, Kganyago said in a virtual webinar hosted by Bloomberg on Friday.