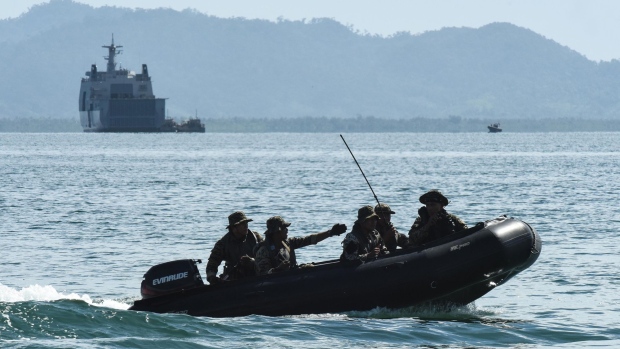 AURORA PROVINCE, PHILIPPINES - MAY 15: A team of special warfare troops of the Philippine Navy patrol the coastline with the Philippine Navy ship, BRP Tarlac in the foreground on May 15, 2017 in Casiguran Province, Philippines. Philippines and U.S. troops held the annual "Balikatan" (shoulder-to-shoulder) joint military exercises with an approximately 6,000 participating troops, consisting of some 2,800 Philippine troops and 2,600 U.S. troops. The annual joint exercises are reportedly smaller in scale compared to previous years as directed by President Rodrigo Duterte, who has taken a softer stance than his predecessor toward territorial disputes with China in the South China Sea while expanding security ties with China and Russia. (Photo by Dondi Tawatao/Getty Images) , Photographer: Dondi Tawatao/Getty Images AsiaPac

(Bloomberg) -- The situation in the South China Sea remains volatile and uncertain amid “aggressive actions” by China and as the U.S. patrols the area to ensure freedom of navigation, the Philippines’ military chief said.

The Philippines wants a code of conduct in the disputed area in place soon to prevent hostile actions as it’s “a potential flash point,” Armed Forces Chief of Staff General Gilbert Gapay said at a Foreign Correspondents Association of the Philippines forum on Tuesday.

“The situation now becomes more intense,” amid aggressive actions by China and the U.S.’s show of force, Gapay said. China’s “maritime militias are there. They’re practically swarming most of the areas in the West Philippine Sea.”

The Philippine military chief also called on Facebook Inc. to be impartial, seconding President Rodrigo Duterte who last month criticized the social media platform for taking down accounts linked to the armed forces and the police.

“We are also telling them as media platform, they should be impartial and unbiased,” Gapay said. “We are now asking Facebook if they could advise before they take down or further investigate” accounts.