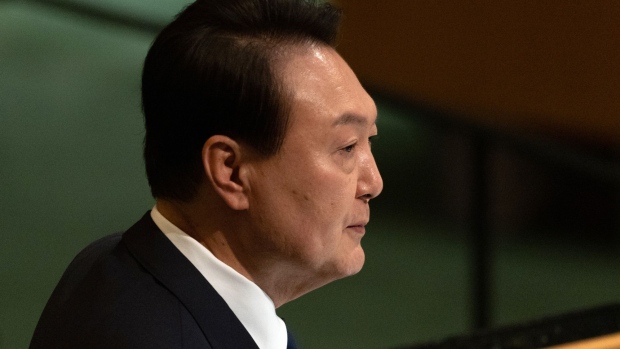 Yoon Suk Yeol, South Korea's president, during the United Nations General Assembly (UNGA) in New York, US, on Tuesday, Sept. 20, 2022. US President Biden, UK Prime Minister Truss and New Zealand Prime Minister Ardern are among the heads of state attending this year after Covid-19 moved the gathering online in 2020 and limited the in-person event in 2021. , Bloomberg

(Bloomberg) -- President Yoon Suk Yeol’s office disputed translations of remarks by the South Korean leader widely interpreted as an insult to the US Congress, as he faced growing calls at home to apologize.

Yoon was overheard insulting American lawmakers, after briefly meeting President Joe Biden in New York to discuss issues including US electric-vehicle subsidies that South Korea wants to change. “What an embarrassment for Biden, if these idiots refuse to grant it in Congress,” video broadcast on South Korean television showed Yoon telling his foreign minister.

On Thursday, however, Yoon Press Secretary Kim Eun-hye denied that Yoon had named “Biden,” saying the Korean word in question was “nallimyeon,” or “blow-up.” She further asserted that “congress” referred to the Korean National Assembly, not the US’s legislature.

“I’d like to ask. What does a country mean to us? Interests of political factions should never come before national interests,” Kim said. South Korea’s presidential office didn’t respond to Bloomberg News’s request for a full translation of Yoon’s remark.

The translation differed from those used by numerous South Korean and international media outlets, including Bloomberg News. And a senior presidential office officials didn’t dispute that Yoon had mentioned Biden’s name when he defended the comments in a briefing immediately after the video was broadcast.

Yoon has come under pressure at home to remedy provisions in the Inflation Reduction Act signed last month by Biden, which includes tax credits of as much as $7,500 for purchases of electric vehicles made in North America. That could disadvantage major South Korean brands like Hyundai and Kia, which don’t yet have operational EV plants in the US.

The president has already faced criticism for shunning an in-person meeting with US House Speaker Nancy Pelosi when she visited South Korea last month, when he was on vacation. The visit, coming just days before the legislation passed, would’ve provided an opportunity to press for changes to the bill.

While it was unclear whether the off-the-cuff comments would affect South Korea’s push for relief in Washington, they were met with derision from opposition lawmakers in Seoul. Lee Woon-wook, a member of the Foreign Affairs and Unification Committee, called for Yoon to apologize and suggested that parliament could issue its own apology if he won’t.

Park Seong-jun, spokesman for the opposition Democratic Party, rejected the presidential press secretary’s translation. “Kim Eun-hye’s explanation will be marked as the worst lie in history, not only to the Korean people but also to the entire world,” Park said in a statement Friday.