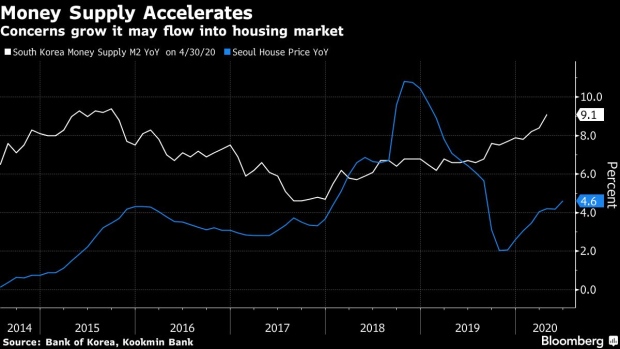 Residential buildings are seen from the Seoul Sky observation deck of the Lotte Corp. World Tower in Seoul , Bloomberg

Affordable housing has been one of President Moon Jae-in’s key policy objectives since taking office in May 2017 with a vow to improve the living standards of a wider range of people. Yet a mismatch of supply and demand in popular neighborhoods and widespread investment purchases have seen prices soar in Seoul.

Record-low interest rates aimed at supporting the virus-hit economy have also contributed upward pressure on prices. Politicians with multiple homes have further complicated the issue by giving the impression they are benefiting from the circumstances.

The Moon administration has already unleashed a series of measures that have cooled price increases in many parts of the country. The challenge is to come up with further steps that can address the remaining pockets of soaring prices without buckling the wider property market or limiting potential stimulus for a sputtering economy.

South Korea’s overheating property market has been largely confined to Seoul and its surrounding areas, with prices broadly stable in other large cities and declining in some smaller regions over the past three years.

The government has expressed concern about excess liquidity flowing into the property market. Broad money supply -- known as M2 -- rose by 9.1% in April from a year earlier, the fastest pace since 2015, as the government expanded loans to struggling companies and handed out cash to families to relieve pandemic pain. The money supply has previously displayed a correlation with Seoul house price growth.

The BOK has cut interest rates by 75 basis points since the pandemic struck, delivering a corresponding decline in lending rates. While that’s a sign of effective monetary policy transmission, it’s a concern when property prices are still rising rapidly.

“There’s not much the central bank can do at this stage,” said Kim Jin-myoung, an economist at Hanwha Investment & Securities Co. in Seoul. “You can’t raise rates for the sole purpose of reining in property prices when the economy is still in a slump from the coronavirus.”

BOK Governor Lee Ju-yeol has repeatedly pledged to keep monetary policy accommodative until the economy recovers from the virus downturn. Minutes of the latest May interest rate decision showed some board members expressed concerns about housing market instability, while proceeding with a rate cut to help the economy.

Construction investment led South Korea’s economic expansion under the former administration, as interest-rates were cut and property regulations eased to buoy a then-stagnant property market. The trend has reversed in recent years, with tighter rules and a correction from the previous housing oversupply.

President Moon vowed late last year that the government wouldn’t use the property market as a means to boost growth. Yet the pandemic has deteriorated the outlook for the economy, which is now expected by analysts to contract this year for the first time since the late 1990s Asian financial crisis.

“The property curbs are negative for the construction investment outlook,” said An Young-jin, an economist at SK Securities. “But the government is willing to endure that as they place greater urgency on reining in the property market.”