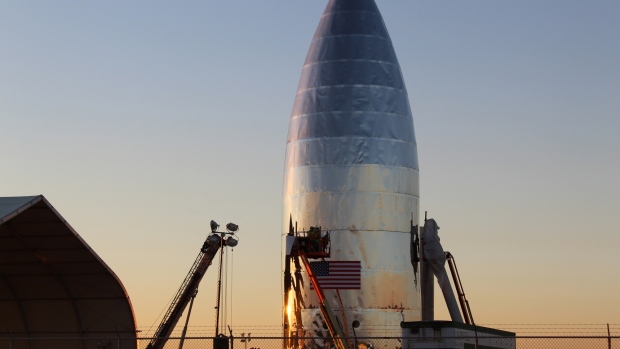 Space Exploration Technologies Corp.’s newest and biggest rocket pulled off its first successful landing, then exploded a brief time later and was engulfed by fire.

The Starship SN-10 prototype lifted off from SpaceX’s seaside launch pad at about 5:15 p.m. in Boca Chica, Texas, on Wednesday, based on a live video stream on SpaceX’s website. The rocket then flew to an altitude of about 10 kilometres (around 6 miles) before turning its engines back on and settling on the landing pad with a slight lean.

Shortly after that, the rocket was lifted into the air by an explosion and consumed by flames, possibly after a fire ignited fuel. Until that point, the rocket appeared to achieve a key milestone with its first stable landing in three attempts. After its ascent, Starship shut off its three Raptor engines and performed a controlled “belly flop” descent, then reignited its engines to make a vertical landing.

Despite the mishap, the test is likely to signal progress for the massive vehicle. An earlier Starship rocket slammed to the ground on the program’s first high-altitude flight Dec. 9, igniting a fireball, followed by a similar outcome with a second prototype last month. No one was hurt in the mishaps, and there were no reports of injuries from the fire after the latest flight, which was the third high-altitude test.

SpaceX founder Elon Musk plans to use the Starship to shuttle as many as 12 people around the moon in 2023, land NASA astronauts on the lunar surface and eventually settle explorers on Mars. The company still has work to prepare the Starship for its first orbital flight, which could occur later this year.

“I’m highly confident that we will have reached orbit many times with Starship before 2023, and that it will be safe enough for human transport by 2023,” Musk said Tuesday in a video released by Japanese entrepreneur Yusaku Maezawa, who has invited eight people to apply to join his “fun trip” around the moon. “It’s looking very, very promising.”

SpaceX conceived the stainless steel Starship as a versatile, fully reusable craft that can carry 100 metric tons for deep-space missions to the moon and Mars. It’s also designed to serve as a hypersonic, point-to-point vehicle to reduce travel times across Earth.

Excluding a heavy booster that creates a two-stage system, Starship is 160 feet (49 metres) high with a 30-foot diameter, and able to carry as many as 100 passengers.

Musk said in October that he’s 80 per cent to 90 per cent confident that Starship will be ready for an orbital flight this year. SpaceX, based in Hawthorne, California, plans to fly multiple Starship prototypes from its Texas launch site near the U.S.-Mexico border.