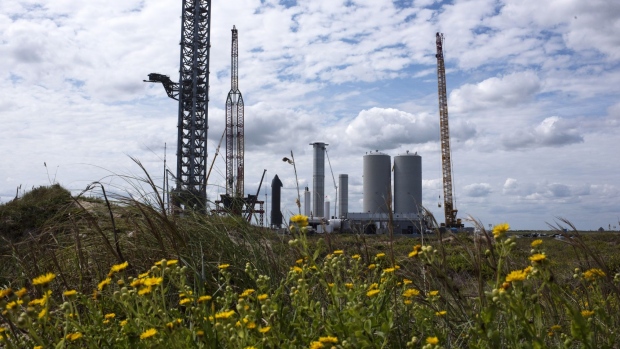 A SpaceX Falcon 9 rocket and Dragon spacecraft, carrying non-professional astronauts, launches from NASA’s Kennedy Space Center launchpad 39A during the Inspiration4 mission in Merritt Island, Florida, U.S., on Wednesday, Sept. 15, 2021. A SpaceX rocket is set to launch four civilians into orbit for a three-day voyage circling the Earth, a new milestone in Elon Musk's quest to send everyday people to the cosmos, eventually establishing a colony on Mars. Photographer: Eva Marie Uzcategui/Bloomberg , Bloomberg

The National Aeronautics and Space Administration awarded Boeing and SpaceX six flights each to carry crew to and from the station after their respective vehicles gain certification, with Elon Musk’s SpaceX now at the halfway mark of its initial contract from 2014.

The newly commissioned SpaceX flights are expected as soon as 2023, NASA said Friday in its notice of a “sole source contract modification.”

The potential value of the contract revision was not released. NASA didn’t immediately respond to a request seeking comment.

SpaceX’s next “Crew-4” flight to the space station is slated for April 15.

“It’s critical we begin to secure additional flights to the space station now so we are ready as these missions are needed to maintain a U.S. presence on station,” said Kathy Lueders, a NASA associate administrator who oversees space operations.

Boeing had planned to launch its CST-100 Starliner in August for a second unmanned demonstration trip to the ISS following a botched flight in December 2019. Several malfunctioning valves on the vehicle forced a cancellation and a deep review of the system.

Boeing hopes to reschedule that test in the first half of 2022, and to fly a demonstration with astronauts late in the year. NASA said it will continue to work with Boeing to understand the issues and to prepare the Starliner for certification.