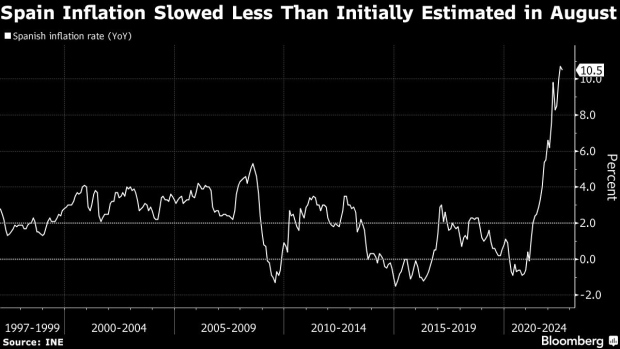 Spanish Prime Minister Pedro Sanchez is raising the stakes over a levy on the rich aimed at easing the burden of soaring inflation, setting the stage for a tax clash with opposition politicians ahead of next year’s elections.

His administration said this week it’s considering skimming off more money from “millionaires” to provide funds to help people who are struggling to pay their electricity and grocery bills. This followed efforts by some regions to get around a national wealth tax.

“We are proposing a redistribution effort by those who have more so that we can finance the welfare state that belongs to everyone,” Sanchez said in a speech on Friday.

Spain is the only member of the European Union with a wealth tax and would become one of the first countries to target the rich to offset the cost-of-living crisis. Sanchez says the move would complement a planned windfall tax on banks and energy companies, and help pay for 30 billion euros ($29 billion) of measures to blunt inflation.

The government of Andalusia, the country’s most populous region, has brought in temporary exemptions to the wealth tax, which raised 1.2 billion euros or about 0.1% of Spain’s gross domestic product in 2020, according to the latest figures from the national tax agency.

Murcia has warned it may do the same, while Galicia has reduced the levy’s effective rate. The three regions, all controlled by the conservative Popular Party, also announced new tax cuts following the example of Madrid, which waived the wealth levy more than a decade ago and is reducing regional income tax.

Spain should strive to “attract wealth and investors instead of kicking them out,” Alberto Feijo, Popular Party leader and a potential contender for the post of prime minister in Spanish elections in late 2023, said on Friday in a sign of growing tensions.

Sanchez’s proposal marks an about-face for an administration that until a few months ago rejected a specific tax on wealth. His Socialists voted against legislation proposed by junior coalition partner Unidas Podemos in June to tax fortunes of more than 10 million euros by as much as 5% a year.

His government is yet to detail its new levy other than to say it will be aimed at 1% of the population and could take effect in 2023. But with polls suggesting a tight election race, Sanchez may adopt more business-unfriendly measures to rally voters and shore up his shaky coalition.

“This tax battle between different levels of government generates a lot of uncertainty for investors,” said Jorge Onrubia, professor of public finance at Complutense University, in Madrid. “We are entering a very divisive electoral period.”

Spain, a major producer of fruit and vegetables, has seen one of the steepest increases in food prices among major European economies since Russian’s invasion of Ukraine triggered an energy crisis that threatens to tip the continent’s economy into recession. They jumped 13.8% in August, the biggest rise since records began in 1994.