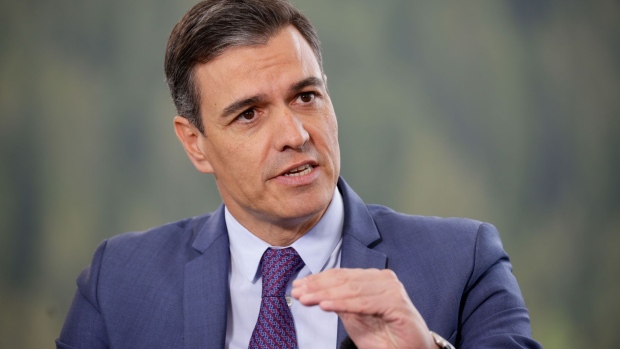 (Bloomberg) -- Southern European leaders demanded changes to a European gas price cap proposal, underscoring the growing rift between the continent’s partners as they struggle to tackle an energy crisis.

The leaders from nine Mediterranean countries, including France, Greece and Spain, will work on a ceiling that is effective in limiting price spikes, Spanish Prime Minister Pedro Sanchez told reporters. Italy, Malta, Cyprus, Slovenia, Croatia and Portugal also participated in the meeting of leaders in the Spanish city of Alicante.

“This proposal needs adjustments in our judgment, and we have agreed to work together in that direction so that this extraordinary energy council next week can agree on a cap on gas prices that is dynamic and truly effective,” Sanchez said after the meeting.

Spain, which managed to push down power prices with its own cap that expires in late May, has derided the original proposal as a mockery. Others have joined Madrid in rejecting the plan. A group of several countries led by Germany and the Netherlands continue to warn that too tight a cap could endanger gas supplies to the bloc.

French President Emmanuel Macron told the joint news conference that the leaders had found a “true convergence of views to get supply security and a drop in gas prices.”

Macron said he hoped for an agreement at the next meeting of EU energy ministers on Dec. 13 “so we have a toolbox of technical measures that enables to avoid the too big volatility of energy prices, in particular gas and avoid speculation” on gas.

The energy ministers are seeking to reach a deal on the contentious issue at the gathering, though discussions could run into a leaders summit later in the week.

The Czech Republic, which holds the rotating presidency of the bloc, proposed a second compromise for a broader price cap — lowering the intervention threshold to €220 ($231) from €275 suggested by the European Commission last month, according to a document seen by Bloomberg.

For Spain, that limit remains too high to be effective, with Madrid calling for a sliding-scale cap that is linked to a price index or a basket of indexes to reflect the market movements.

In another divisive issue, the Mediterranean leaders agreed that the EU’s plan to overhaul the continent’s fiscal rules is a good starting point, Sanchez said. That is in sharp contrast to the position of Germany, which rejected the proposal to negotiate debt rules individually with member states.

--With assistance from Angelina Rascouet and Sotiris Nikas.