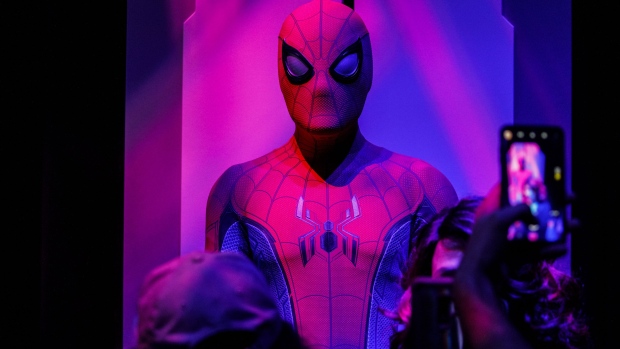 Attendees take pictures of a Spider-Man suit on display at the Marvel Studios Avengers Campus preview at the D23 Expo 2019 in Anaheim, California, U.S., on Friday, August 23, 2019. Walt Disney Co. is turning the D23 Expo, the biennial fan conclave, into a big push for its new streaming services. , Bloomberg

(Bloomberg) -- The Spider-Man character is expected to disappear from Walt Disney Co.’s Marvel movies following a split with Sony Corp., but he’ll still be front and center in new theme-park attractions that Disney is planning for France and Southern California.

At a fan convention on Friday, the company showed off plans for rides and experiences that feature Spider-Man, Spider-Bots and a high-tech version of the hero’s red-and-blue suit.

Disney acquired Spider-Man when it bought Marvel Entertainment for $4.2 billion in 2009. But there’s still a tangled web of rights surrounding the character. Sony owns the movie license, letting it make films about the superhero and related characters, such as the Green Goblin and Venom.

Universal Studios, meanwhile, owns the theme-park rights to many of Marvel’s superheros east of the Mississippi -- under a deal that predates Disney’s ownership. It operates a ride called Amazing Adventures of Spider-Man at the Universal Orlando Resort in Florida. The Spider-Man comic books, where the character was born, are part of Disney.

Sony and Disney had been co-producing Spider-Man movies, and including the web-slinging character in Disney’s Marvel Cinematic Universe. But talks to extend the arrangement broke down after Disney asked for more generous financial terms, people familiar with the matter said this week.

If the parties don’t return to the table, the falling-out means Marvel President Kevin Feige won’t be lending his touch to Sony’s future Spider-Man films. And the character probably won’t appear in Disney’s Marvel universe, a series that’s generated more than $22.5 billion globally.

That puts Disney in the somewhat awkward position of promoting a character, but not getting a payoff at the box office.

Disney has been gradually increasing the presence of Marvel characters in the decade since it acquired the business. An Iron Man ride opened to much fanfare at Disneyland Hong Kong in 2017. That same year Disney converted its Twilight Zone Tower of Terror at its California Adventure park in Anaheim, California, into a ride based on Marvel’s “Guardians of the Galaxy.”

“When guests visit Avengers Campus, they will become part of an interconnected, global story that spans from California to Paris to Hong Kong, with the Avengers recruiting new extraordinary people to join them,” the company said in a blog post.

But that interconnected, global story may only include Spider-Man when he’s offscreen.