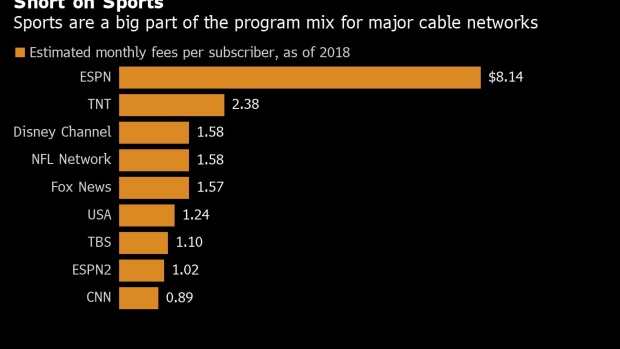 (Bloomberg) -- With basketball, hockey and baseball on hold because of the coronavirus, conversations about sports these days focus on economics, not the standings or playoffs.

TV is the No. 1 source of revenue for sports -- exceeding the value of tickets, merchandise, beer and peanuts. Networks like Walt Disney Co.’s ESPN pay billions of dollars for the rights to broadcast games, sell advertising to car and snack companies, and charge pay-TV providers to carry their telecasts. Ultimately, fans watching from their couches bear the cost by sitting through commercials and paying their cable bills.

All that has been upended by the suspension of major sports. At last count, Comcast Corp.’s NBC had sold more than $1.25 billion in ads for the Tokyo Olympics -- games that have now been postponed until 2021. NBC’s arrangements, along with other networks’ deals for basketball, baseball, hockey and countless lesser sports. will all have to be reworked.

“You’ve never had three major leagues that provide content all shutting down at once,” said Lee Berke, a sports-media industry consultant. “Ultimately, you’re going to get settlements done, and potentially refunds provided.”

In TV lingo, that means there will be lots of make-goods. The leagues will have to offer networks such as CBS, Fox and NBC concessions in return for missed games. Similarly, networks will have to provide relief to cable operators, who, in theory, would pass along savings to their customers.

“It’s still premature, but we are monitoring the situation closely,” Charter said in an email.

Talks to redress canceled programming probably won’t begin in earnest until a major league actually cancels its season. So far, the NBA and NHL have put their regular seasons on hold with a goal of salvaging some portion of the campaign, even if it’s just the playoffs. Baseball has postponed the start of its season. CBS and AT&T Inc.’s Turner were expected to pay the NCAA $992 million for March Madness, according to S&P Global.

Negotiations surrounding make-goods could include anything from refunds to extra programming to the extension of deals without a price increase. ESPN and Turner pay the NBA about $2.6 billion annually.

Michele Roberts, executive director of the union that represents NBA players, said “more than a significant” amount of the league’s annual revenue is generated during the postseason, which makes staging playoffs crucial, even without fans in the stands.

The most difficult discussions, Berke said, will involve regional sports networks, some of which carry teams from multiple leagues. While ESPN can air “SportsCenter,” specials and dip into a trove of archives, RSNs have few options outside of classic games. RSN contracts with cable operators usually call for a minimum number of games and teams.

“If they’re not hitting those minimums, there are going to be serious discussions,” Berke said.

That’s bad news for Sinclair Broadcast Group Inc., which paid $9.6 billion last year for the 21 regional sports networks that were once part of the Fox sports empire.

The networks, in cities like New Orleans, Detroit and Indianapolis, have local rights to more than 40 NHL, NBA and MLB teams, plus smaller leagues and clubs. They had about 74 million subscribers and generated $3.8 billion in revenue in 2018.

Additionally, AT&T is seeking to sell four RSNs it acquired with the purchase of Time Warner Inc. in 2018.

Most of the contracts governing professional sports include a force majeure clause to protect against disasters, though inexact language can lead to disputes. The NBA’s labor contract with its players, for instance, specifically mentions epidemics and allows owners to withhold players’ salaries for games that aren’t played.

“It’s hard for any media company to try and manage what is happening right now,” David Levy, the former president of AT&T’s Turner division, said via email. “Some advertisers do not have any idea if they will be in business in three months. Creativity is going to be a must!”