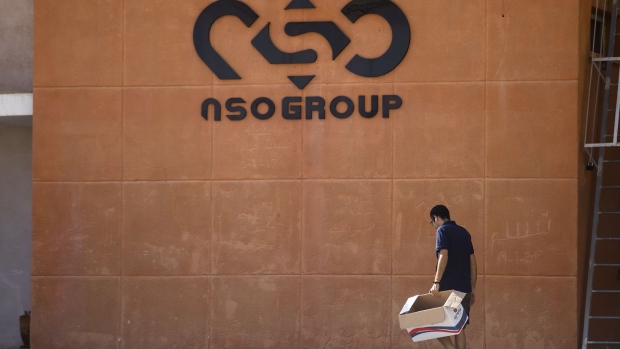 SAPIR, ISRAEL - NOVEMBER 11: A man walks by the building entrance of Israeli cyber company NSO Group at one of its branches in the Arava Desert on November 11, 2021 in Sapir, Israel. The company, which makes the spyware Pegasus, is being sued in the United States by WhatsApp, which alleges that NSO Group's spyware was used to hack 1,400 users of the popular messaging app. An US appeals court ruled this week that NSO Group is not protected under sovereign immunity laws. (Photo by Amir Levy/Getty Images) , Photographer: Amir Levy/Getty Images Europe

(Bloomberg) -- NSO Group, the Israeli developer of a phone-hacking tool that allegedly allowed governments to spy on political dissidents and journalists, is discussing a sale of its assets to the U.S. venture capital firm Integrity Partners, according to people with knowledge of the negotiations.

Herzliya-based NSO, which has seen its revenue plunge amid the controversy and after the U.S. Commerce Department put the company on its export blacklist, has been in danger of defaulting on the debt it issued to fund a buyout in 2019. It hired advisers last year to help it pursue a restructuring or sale, Bloomberg previously reported. Israeli newspaper Haaretz was first to report the talks with Integrity on Tuesday.

Discussions with potential buyers continue and terms haven’t been finalized, said one of the people, who asked not to be named because the talks are private. The company has been focusing on proposals that would turn the know-how behind its Pegasus spyware product into strictly defensive cyber security services, Bloomberg has previously reported.

A representative for Integrity Partners declined to comment, while a spokesperson for NSO didn’t immediately respond to a request for comment outside normal business hours.

NSO’s Pegasus hacking tool, which allows clients to gain access to a target’s mobile phone, was pitched to investors and sold to governments as a foil against terrorism and drug trafficking. But in the last few years, the company has come under fire for licensing it to nations that have been accused of spying on dissidents, journalists and human-rights activists.

Pegasus was reported to have been used to hack the mobile phones of at least nine U.S. State Department employees. Poland’s government last year was accused of hacking the mobile phone of a lawyer representing top opposition officials during the 2019 parliamentary election campaign. The government has denied the accusations.