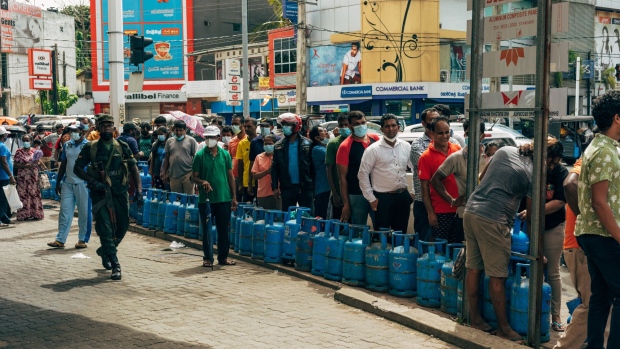 People wait in a queue for gas at the Pellawatte Litro Gas filling station in Colombo, Sri Lanka, on Sunday, May 22, 2022. Sri Lanka’s dollar bonds due July rebound after Friday’s drop, up almost 5 cents on the dollar in the biggest gain since October, as the government holds bailout talks with the IMF. , Bloomberg

(Bloomberg) -- Sri Lanka plans to appoint two ministers -- one for Finance and the other for Economic Revival -- to spearhead debt-restructuring talks abroad without slowing policy making at home.

There is no shortlist for Finance Minister, who would be crucial to lead negotiations with global bondholders and the International Monetary Fund, according to a person with knowledge of the matter. Prime Minister Ranil Wickremesinghe could double up as Minister for Economic Revival to guide domestic policy, the person said, asking not to be identified discussing private deliberations.

The key Finance portfolio has been left vacant since May 9, when Mahinda Rajapaksa resigned as prime minister and dissolved his cabinet. Sri Lanka needs $4 billion in coming months to help pay for food and fuel and the lack of a finance minister will impede progress, investors and the nation’s central bank governor have warned.

“Without a proper replacement, any discussion now with the IMF is subject to further affirmation, so they won’t have any material progress,” said Carl Wong, head of fixed income at Avenue Asset Management. “The bondholder group perhaps needs a bit of patience. The top priority of the government is to fix the economy and stabilize the situation, debt management will follow.”

Sri Lanka’s dollar bonds due July rallied the most since October as investors anticipate early talks with the IMF, due to conclude on Monday, will show progress toward a debt bailout. However central bank Governor Nandalal Weerasinghe said last week that the country urgently needed a finance minister as technical level talks with the IMF wouldn’t be able to progress to secure a loan.

The government is hoping to appoint ministers to the Finance and Economic Revival roles this week, the person said, adding that talks are ongoing between the ruling party and opposition and there’s no certainty of the appointments. At least two lawmakers have declined the role of Finance Minister, according to other people familiar with the matter.

Saman Ekanayake, secretary to the prime minister, said by phone that he wasn’t aware who the finance portfolio would go to, or the reason for the delay to make the appointment. Sudewa Hettiarachchi, director general of the president’s media unit, said “discussions are still ongoing,” while declining to elaborate.

The South Asian country fell into default on its foreign debt May 18 after failing to pay $78 million in combined coupon payments for notes maturing 2023 and 2028. About 20 ministers have been sworn in so far, including officials overseeing energy, tourism, health and food security.