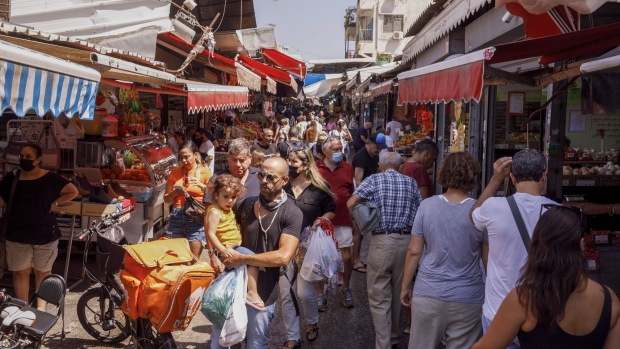 Shoppers pass between stalls in Carmel Market in Tel Aviv, Israel, on Monday, Sept. 20, 2021. A third dose of the Pfizer Inc.-BioNTech SE Covid vaccine can dramatically reduce rates of Covid-related illness in people 60 and older, according to data from a short-term study in Israel. Photographer: Kobi Wolf/Bloomberg , Bloomberg

(Bloomberg) -- Israel’s parliament approved the 2022 national budget, injecting a long-absent sense of stability into the country’s economic planning and removing an immediate threat to the survival of Prime Minister Naftali Bennett’s fractious government.

A day earlier, lawmakers passed a spending plan for 2021, the first approved in more than three years. The votes prevented the collapse of the government, which would have fallen automatically if no budget had been approved, and moved Israel beyond years of political chaos that eased when Benjamin Netanyahu was unseated in June.

The budget had been a direct casualty of that turmoil, with a majority of lawmakers failing to line up behind a spending plan since 2018.

The 2021 budget is 432.3 billion shekels ($139 billion), which then increases to 452.5 billion shekels the following year, according to a statement from the Finance Ministry on Friday. Those figures exclude debt repayment and virus-related expenses.