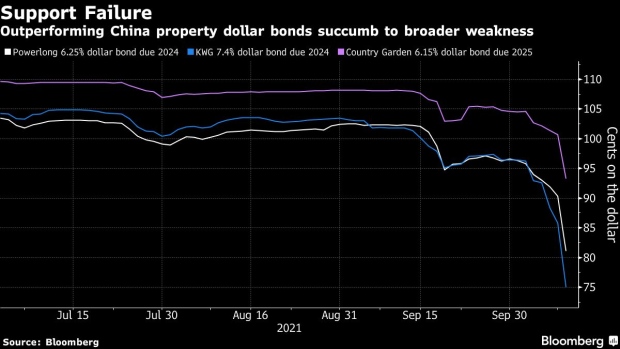 (Bloomberg) -- Beijing won’t allow the turbulence surrounding China Evergrande Group to turn into a systemic crisis, the chief executive officer of Standard Chartered Plc said, adding that the Asia-focused lender has no “concerning exposures to the property sector.”

“This idea that this was something of a Lehman moment for China: I don’t think China’s frankly that dumb,” Bill Winters said in an interview with Bloomberg Television on Tuesday.

Meanwhile, the International Monetary Fund said China faces tough trade-offs in dealing with the fallout from Evergrande’s financial troubles, given the balance between cutting leverage and preventing risk.

More than 24 hours have passed without any clarity about whether the embattled developer has delivered interest payments due Oct. 11 for three of its dollar bonds. While holders of these notes will discover their fate within a 30-day grace period, life may be more complicated for the company’s shareholders.

Evergrande’s shares have been suspended for seven trading days as of Tuesday. Despite a requirement for halted firms to make regular public disclosures, it takes as long as 18 months for Hong Kong’s stock exchange to cancel their listings.

The lender, which has a heavy focus on Asia, has no “concerning exposures to the property sector,” CEO Bill Winters said in an interview with Bloomberg Television recorded in London on Tuesday.

Evergrande’s trading halt has led to days without a company statement detailing the reason -- and it’s all too familiar for Hong Kong traders who’ve had to navigate dozens of similar episodes this year alone.

Some 81 stocks on Hong Kong’s main board have been suspended for three months or more, according to exchange data as of Sept. 30. Most were halted in 2021, including China Huarong Asset Management -- the bad-debt manager that roiled markets after delaying its earnings report. In the U.S., suspensions are capped at just 10 days.

China faces tough trade-offs in dealing with the fallout from the financial troubles at Evergrande, the International Monetary Fund said.

On the one hand, the country risks being seen as backing off from its economic deleveraging drive if it provides too much support to Evergrande and other affected companies, the Washington-based lender said Tuesday in its semiannual Financial Stability Report. On the other hand, it could spur more stress if it puts off arranging backing for the financial system.

China Real Estate Association plans to hold a symposium with property developers in Beijing Friday to learn about risks the companies are faced with, China Business News reported.

The investigation would help the authorities implement property industry policies amid recent market fluctuations, the report cited an unidentified person as saying.