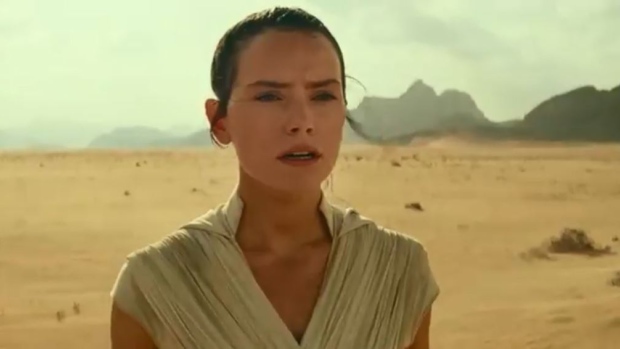 Walt Disney Co. Chief Executive Officer Bob Iger said he’s not at all concerned that consumers may be overexposed to the Star Wars brand, but the film franchise will go on “hiatus” after December’s big release.

The upcoming film, titled "Star Wars: The Rise of Skywalker" in a teaser clip dropped on Friday, is the ninth in the so-called Skywalker saga and slated for release on Dec. 20. It’s the third installment of a film trilogy that Disney began with “The Force Awakens” in 2015.

After that, the franchise will focus more on TV projects, Iger said.

“We will take a pause, some time, and reset,” he said, “because the Skywalker saga comes to an end with this ninth movie. There will be other Stars Wars movies, but there will be a bit of a hiatus.”

This is a critical year for Disney’s Star Wars business. The company is introducing two new Star Wars-themed lands at its parks in California and Florida this summer — and anticipating massive crowds.

Every generation has a legend. Watch the brand-new teaser for Star Wars: #EpisodeIX. pic.twitter.com/fWMS13ekdZ

Yet there’s a growing disturbance in the galaxy. Last year’s “Solo: A Star Wars Story” — a stand-alone film that wasn’t part of the saga — was the lowest-grossing film in the four-decade history of the franchise. Star Wars toy sales fell in 2018 for the second year in a row, according to NPD research.

No less an authority than actor Mark Hamill, Luke Skywalker himself, said he had experienced Star Wars fatigue in an interview this week.

When “Solo” debuted, some critics said Disney had begun to release Star Wars movies too quickly, overwhelming fans. A film hiatus may help address that. There are other movie projects in development, including a series from “Game of Thrones” creators David Benioff and D.B. Weiss, but nothing has been scheduled.

In the meantime, Disney will be focused on making content for its streaming platform. The company is creating the first-ever live action Star Wars TV series, “The Mandalorian,” which will air on the Disney+ service starting in November. That new online product also will have another live-action Star Wars series and the animated show “Clone Wars.”

The pivot to TV demonstrates that Star Wars creators at Disney’s Lucasfilm are being innovative, according to Iger.