Starbucks Corp. shares slipped on Thursday as US$20 billion in new payouts to shareholders failed to offset quarterly results that fell short of expectations.

The key measure of same-store sales rose 17 per cent worldwide in Starbucks’s fiscal fourth quarter, which ended Oct. 3. Analysts estimated a gain of 19 per cent, according to estimates compiled by Bloomberg. The coffee chain also missed estimates for overall revenue and U.S. same-store sales.

Additionally, the company’s outlook for operating margin of 17 per cent for the current fiscal year was below analysts’ expectations. Restaurants are facing an unprecedented surge of costs that encompass wages, packaging, freight and more, and it’s unclear when this situation will abate. 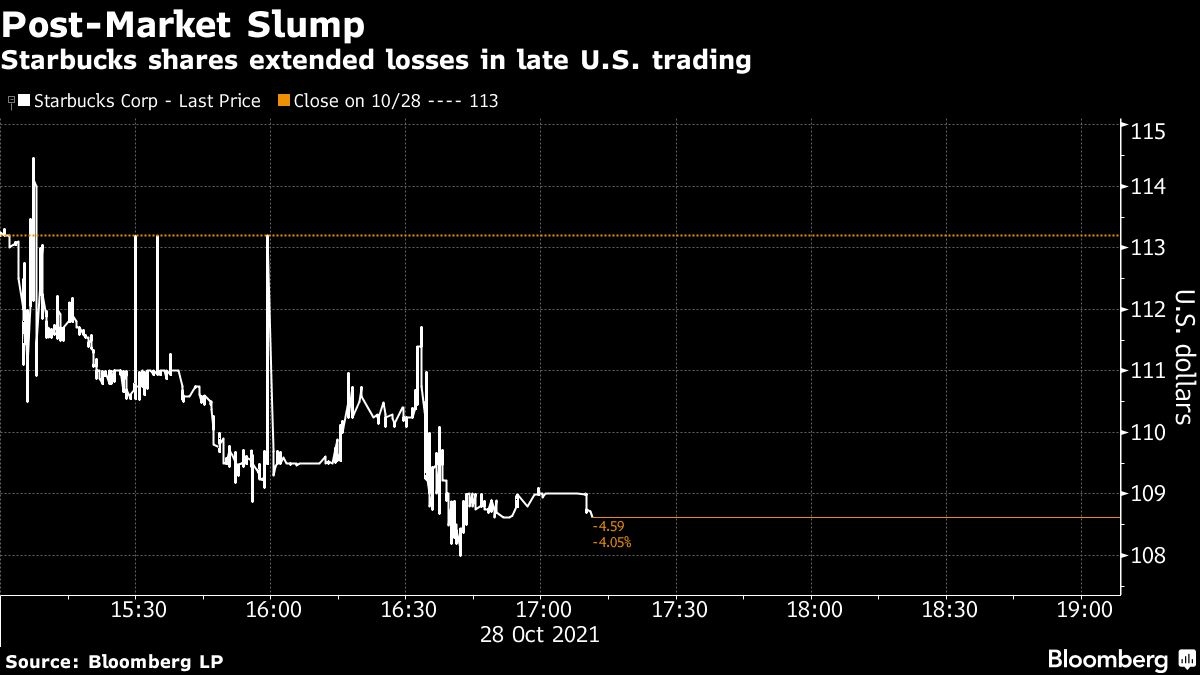 While Starbucks is rapidly bouncing back from the pandemic, investors appear to be questioning the pace of the rebound. The new round of investor payouts over the next three years may help assuage concerns, but the company faced repeated questions on its call with analysts about its ability to hike prices in order to pass higher costs on to consumers.

Chief Executive Officer Kevin Johnson said that the company has the power to raise prices as needed in an inflationary environment. He added that Starbucks is in the process of winning over market share as economies reopen and restrictions loosen.

“Consumer demand is strong. This moment in time is an inflection point,” Johnson said.

Comparable-store sales in China fell 7 per cent -- better than the average estimate for a 7.5 per cent decline from analysts. Renewed pandemic measures have curbed economic activity in the world’s most-populous nation, an important market for Starbucks along with the U.S. Like last quarter, the company also cited the adverse impact from value-added tax exemptions a year earlier in China that hurt comparisons.

Johnson said that performance dipped in August as restrictions limited consumer mobility in China, but have started to rebound in September.

As part of plans to capture sales from competitors, Starbucks plans US$2 billion of capital expenditures this year as it aggressively expands, especially in China.