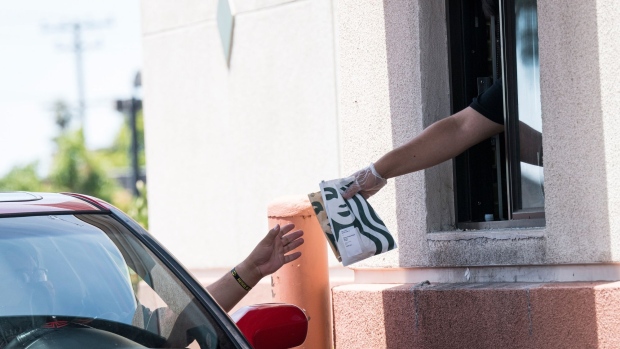 A Starbucks Corp. employee wearing protective gloves hands a bag to a customer through a drive-thru window at a store in El Cerrito, California, U.S., on Wednesday, June 10, 2020. Starbucks Corp. expects the coronavirus pandemic to reduce sales this quarter by as much as $3.2 billion, dragging down the coffee chains performance as it sees a recovery stretching into next year. Photographer: David Paul Morris/Bloomberg , Bloomberg

(Bloomberg) -- Starbucks Corp. is asking the U.S. labor board to overturn a ruling allowing store-by-store unionization in Arizona, where ballots were already mailed to employees last week.

In a Monday filing with the National Labor Relations Board, the coffee chain sought to overturn a regional director’s ruling that deemed the employees of a single store in Mesa an appropriate potential bargaining unit. As it has in similar disputes across the country, the company argued that any election should include a larger group of workers in the region, meaning the union would need many more votes to prevail. In the Jan. 7 Arizona ruling, the regional director found there was insufficient reason to depart from the agency’s standard position that the employees of a single worksite constitute an appropriate voter pool for a union election.

“Trying to prevent our votes from being counted is so undemocratic,” Michelle Hejduk, an Arizona Starbucks employee, said in an emailed statement from Workers United, an affiliate of the Service Employees International Union. “But the partners will win.”

Starbucks didn’t immediately respond to a request for comment.

Arizona employees’ ballots are due back by Feb. 2. Starbucks’s appeal asks that the NLRB members in Washington either halt the election or impound the ballots while considering the company’s arguments. A trio of NLRB members in December rejected a similar appeal by Starbucks, which had sought to quash the counting of ballots in New York. That paved the way for Workers United’s landmark wins at two stores in the Buffalo area and the subsequent filing of a flurry of election petitions by workers across the country.