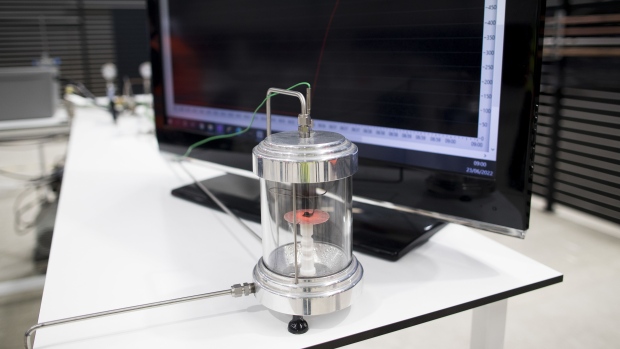 (Bloomberg) -- A small Australian research lab tucked away in a coastal town, 70 kilometers (43 miles) north of Sydney, says it has developed a patented technology using a catalyst that can turn hydrogen and oxygen into superheated steam capable of driving a power-station turbine.

“Our model works on heat from hydrogen,” said Andrew Horvath, chairman of Star Scientific Ltd. The system is “plug-and-play,” he said at the company’s research facility in the town of Berkeley Vale. “It is quickly deployable, it’s a lot smarter to work with.”

Wearing high-vis jackets and safety goggles, Chief Technology Officer Steve Heaton and another member of the team demonstrated an experimental model that looks like a French coffee press. Bottled hydrogen and oxygen are fed into a glass cylinder containing the secret catalyst, which quickly turns orange as it heats up to around 700 degrees Celsius (1,292 Fahrenheit). If the technology can scale up, it could ultimately allow power plant operators that burn coal to retrofit generators to run on green hydrogen without having to construct a completely new plant.

“We think there are a lot of opportunities in existing steam turbines that have some longevity,” said Horvath, citing the example of Japan where 70% of its turbines still have 40 years of life left. “Why would you throw them away? They’re already connected to the grid.”

In January 2021, the company signed an agreement with the Philippines government to study retro-fitting coal-fired power plants in the Southeast Asian nation.

Star Scientific’s system differs from traditional ways of generating heat from hydrogen, such as through combustion or in fuel cells, according to Horvath, who as a child would spend weekends in the lab of his nuclear physicist father, experimenting with the gas.  “We don’t burn hydrogen and that’s going to be the real key that we’ve been driving and people are taking notice of,” he said.

Staff are fielding dozens of emails a day from prospective clients, he said, and the company is in talks with water-treatment companies, brewers, dairy firms and abattoirs about using the system. “There’s so much demand, the market’s coming to us,” he said.

A pilot project to test the system at a factory run by a local unit of Mars Inc. is awaiting regulatory approval, which Horvath expects will come in 2023.

The technology “offers enormous potential across the food manufacturing industry,” said Bill Heague, general manager of Mars Food Australia. “Thermal energy is crucial to the business of cooking food and this technology has the capability to create limitless heat without any combustion and zero emissions.”

Star Scientific was started 25 years ago to commercialize nuclear fusion work done by Horvath’s father Stephen that used heavy hydrogen containing unstable sub-atomic particles called muons. During the research, the team unexpectedly discovered a way to convert hydrogen into heat without burning it, a breakthrough patented as the Hydrogen Energy Release Optimiser, or HERO.

“Star Scientific's technology can be scaled up and used for a variety of different applications either direct energy generation through a turbine or just thermal heating,” said Scott Donne, a professor at the School of Environmental and Life Science in the University of Newcastle, near Star Scientific’s lab. “Around where we are in Newcastle, there are four very large coal-fired power stations that basically use steam to actually drive their turbines. At the moment, it's done with coal-fired power but it could conceivably be done with hydrogen using the existing infrastructure.”

Horvath said Star Scientific isn’t planning to do a public share sale. “We have a unique funding model that is confidential at this time,” he said. The company in 2019 set up a subsidiary called Planet Power Finance AG in Zurich to invest in hydrogen and green electron technologies, hiring as CEO Franziska Blindow-Prettl, a former partner at LGT Capital Partners and head of the LGT Family Office — part of the $250 billion wealth management group of the Liechtenstein Royal Family, according to its website.

The company is trying to build interest in the technology globally. During a visit to the US in June, “we learned about the difficulties of moving gasses around the USA and the various congressmen and senators we spoke with learned about a better way to use hydrogen,” Horvath said.

He said the technology has no cost or safety issues, but “the biggest challenge we are always going to have is the hydrogen supply.”

The company currently uses bottled hydrogen, which is typically made at present by combining steam and natural gas, a process that generates carbon dioxide. Scaling up applications like Star Scientific’s heat device will require a lot more zero-emission or green hydrogen, which is made by electrolyzing water.

“HERO can use any color of hydrogen, but our preference is green, so the process is carbon-free,” said Horvath. “You need to get that industry rolling and for that you need more” users of the gas like us, he said.

The good news is that Australia has begun to invest billions of dollars in making green hydrogen. There are about 95 GW of hydrogen electrolyzer projects in the pipeline in the country, roughly a quarter of the global total, according to Rystad Energy, including plans by BP Plc and Fortescue Metals Group. In June, BP agreed to buy a 40.5% stake in the Asian Renewable Energy Hub in Western Australia, which aims to become one of the largest renewable-energy and green-hydrogen production centers in the world.

Star Scientific’s technology will have to wait until such projects come online to provide a reliable volume of affordable hydrogen before it can be scaled up.

“One thing that is certainly required for the application is a good supply of hydrogen and there's a tremendous amount of effort going in at the moment to developing green hydrogen as a fuel,” said Donne at the University of Newcastle. “It's something that they're waiting on for the near future.”