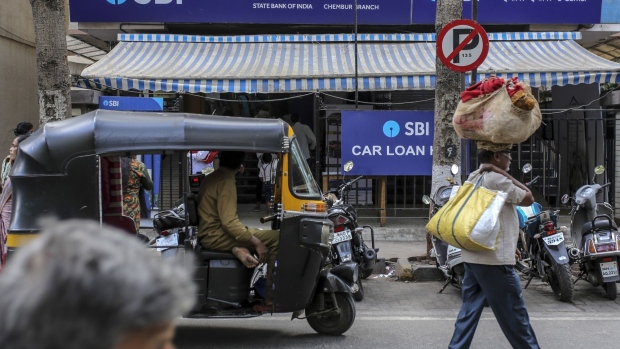 Pedestrians and an auto-rickshaw pass a State Bank of India Ltd. (SBI) branch in Mumbai, India, on Friday, March 6, 2020. SBI has been selected to lead a consortium that will inject new capital into Yes Bank Ltd., people familiar with the matter said, after the Indian government stepped in to organize a rescue plan. Photographer: Dhiraj Singh/Bloomberg , Bloomberg

Net income rose 55% to 65 billion rupees ($876.2 million) in the three months to June, according to a statement Wednesday. That beat the average estimate of 54 billion rupees from 14 analysts in a Bloomberg survey.

The results from SBI, which controls a fifth of India’s loan market, are a key barometer of the nation’s financial health and the lender plays a key role in the economy’s revival from the pandemic. The bank has been the country’s best performing state-run lender with relatively good asset quality compared to its peers, a strong secured retail lending portfolio and a robust bad-loan cushion.