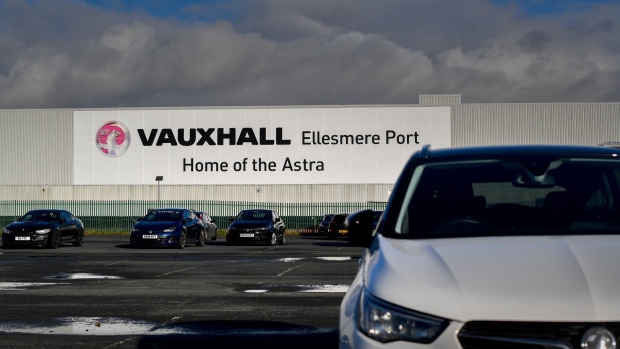 (Bloomberg) -- Stellantis NV is reviewing options for its Ellesmore Port car factory in England including closing the site if it can’t reach a deal with the U.K. government.

The automaker is considering making electric cars at the factory, according to a person familiar with the matter. It hopes to reach a binding agreement in the near future, Michael Lohscheller, who heads the group’s Opel and Vauxhall unit, told Bloomberg News.

“At this stage these discussions are productive but not conclusive,” said Lohscheller, who declined to comment on possible production plans. While a lack of government support may require closing the factory that employs about 1,000 people, the carmaker expects authorities to “behave in the interest of the U.K. economy,” he said.

The site, which makes Opel and Vauxhall cars, has emerged as an early test case for the U.K.’s carmaking prospects after the Brexit trade agreement reached in late December. Stellantis Chief Executive Officer Carlos Tavares had frozen spending in the country due to uncertainty related to Brexit. He also raised concerns last month about costs and bureaucracy springing from the Brexit deal as well as Prime Minister Boris Johnson’s 2030 ban of combustion-engine cars.

Stellantis is seeking financial incentives to produce a fully electric vehicle at Ellesmere Port, along with commitments on the post-Brexit trade of auto parts including batteries, said the person, who asked not to be named because the talks are private. The project would reflect the planned combustion-engine ban and the U.K.’s push to build up green industries in the country, the person said.

“We would disclose this in due time, but first we need the U.K. government support to make it happen,” he said.