With 18 days to go until the U.S. election, growing odds that Democrats will take control of the White House and the Senate is sending volatility gauges for stocks and bonds in opposite directions.

The Cboe Volatility Index -- known as the equity market’s “fear gauge” -- has been relatively subdued this month. That’s at odds with the U.S. Treasury market’s equivalent measure: The ICE BofA MOVE Index jumped by the most since March last week after languishing near record-low levels.

While bets on price swings are taking opposite tacks, analysts say that traders are wagering on the same story. With Democratic nominee Joe Biden comfortably ahead of Donald Trump in presidential election surveys and his party gaining ground in several Senate polls, the current calculus is that a so-called blue wave would unleash another round of economic stimulus -- pressuring Treasury yields higher. Meanwhile, anxiety over a contested result is easing on gauges of stock-market volatility.

“Markets are seeing the upcoming elections and any final word on stimulus as important data points on whether this will be a true inflection point for interest rates,” said Sameer Samana, Wells Fargo Investment’s senior global market strategist. “With the odds of a Biden win and a blue wave increasing, the bond markets sees increasing chances of larger stimulus.” 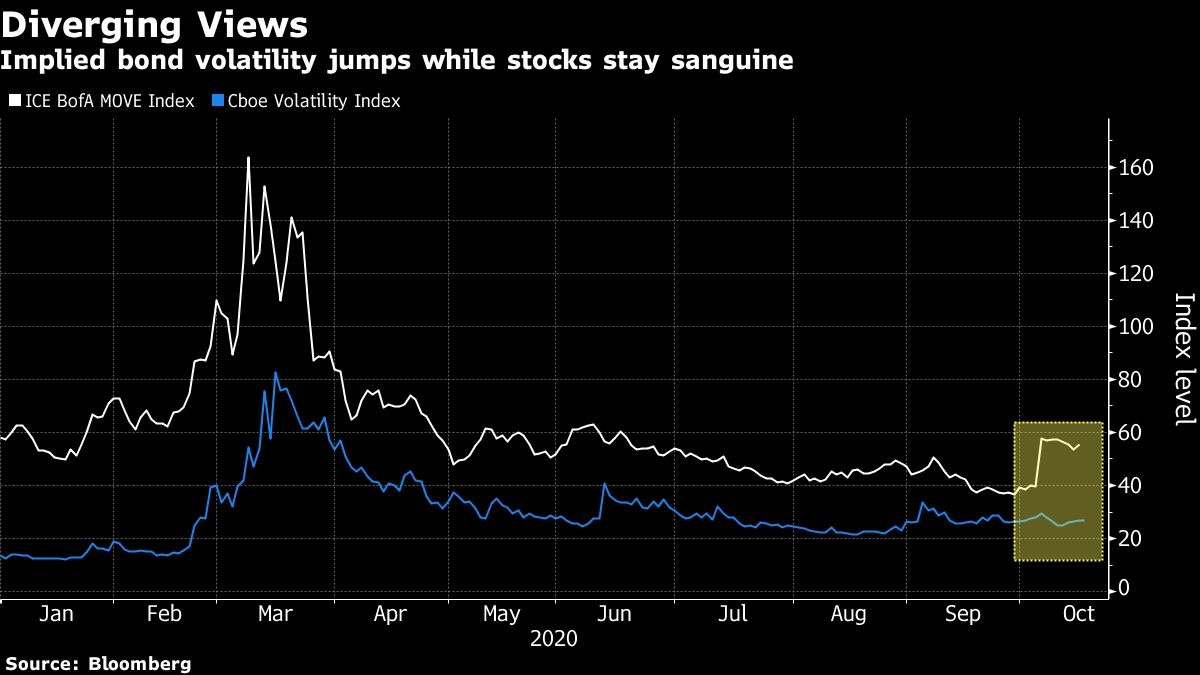 Benchmark 10-year Treasury yields touched the highest level since June last week as Biden’s lead in the polls widened, but have since retreated as stimulus negotiations seemed to deadlock. Still, five- and 10-year breakeven rates -- a proxy for inflation expectations and the chances of stimulus getting passed -- remain near recent highs.

Equity traders had been bracing for a too-close-to-call election, with implied volatility elevated long after the vote itself. But those fears have ebbed as Biden’s polling lead grows, with UBS Group AG noting this week that election-risk premium is at its lowest since March.

“In the equity market, what investors care about is a close or contested election,” said Credit Suisse Group AG’s Mandy Xu in a Bloomberg Television interview Thursday. “As the probability of a Democratic sweep goes up, that risk premium has come in.”