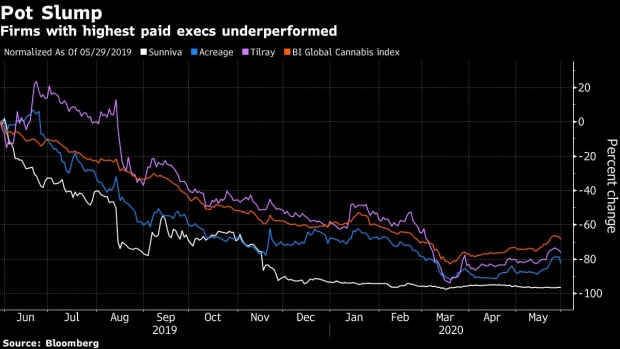 (Bloomberg) -- Tilray Inc., Acreage Holdings Inc. and Sunniva Inc. had the highest-paid executives and directors among cannabis companies, according to a new survey by Bedford Consulting Group.

The report examined the compensation of 437 executives and 449 board members at 96 pot firms. The data was collected in October, when the average cannabis share price was about one-third higher than it is today.

Of the 166 CEOs included in the survey, Tilray’s Brendan Kennedy had the highest total compensation at C$31.8 million, of which 97% was shares or options. Former Canadian Prime Minister Brian Mulroney was the highest-paid director, receiving C$13.9 million from Acreage, all of which was equity-based.

And Todd Patrick at Sunniva was the highest paid among non-executive board chairs or lead directors with compensation of C$1.8 million, 95% of which was options. Patrick resigned from Sunniva’s board in January.

Here are a few more takeaways from the report:

Aphria Inc. will become the first cannabis company to transfer its listing from the New York Stock Exchange to the Nasdaq. Cost cutting appears to be the primary motivator for the on June 5 switch, as the Nasdaq has lower ongoing listing fees than the NYSE. However, the move could also signal approaching M&A, according to Jefferies analyst Owen Bennett.

“Looking further out, it could signal the nearing of a deal into the U.S. given Nasdaq transaction fees around share issuance,” Bennett said in a note published May 26.

Aurora Cannabis Inc.’s deal to acquire CBD firm Reliva LLC earlier this month makes Aphria one of the only large Canadian pot producers that doesn’t have a presence in the U.S. Unlike Aurora, Cronos Group Inc., Canopy Growth Corp. and Tilray, Bennett doesn’t think Aphria will follow its peers in buying a CBD company.

“Its strategy into the German market was built upon taking positions in non-cannabis assets (which did not have a cannabis premium attached) and leveraging them where appropriate,” Bennett said. “Should Aphria indeed make a near-term move into the U.S., we would expect the entry strategy to mirror that for Germany.”

Canopy Plunges After Missing Demand For Cheaper Pot Amid Virus