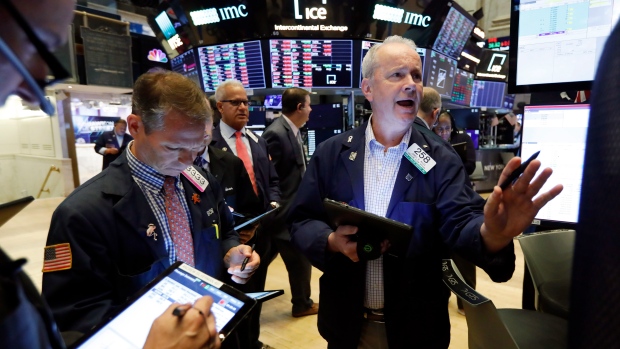 A volatile few months for global stock markets is taking its toll on exchange-traded funds.

Almost US$18 billion fled U.S.-listed equity ETFs during the past three weeks, the most since February, according to data compiled by Bloomberg Intelligence. Investors pulled more than US$3.5 billion in the five days through Aug. 16, capping what was also the longest run of weekly withdrawals in six months.

Stocks swings have intensified in the U.S. recently, with the benchmark equity index closing at a new high July 26 only to tumble as much as 6 per cent in the weeks that followed. Investors have been put on edge by President Donald Trump’s vacillating rhetoric on trade with China and a domestic interest-rate cut that’s fanned rather than calmed global recession fears. Many have responded by taking money off the table.

“Everybody is flipping out,” said Paul Nolte, a portfolio manager at Kingsview Asset Management in Chicago. “We’ve had three down weeks of equities, we’ve seen the yield curve flatten out and fall, and investors are very sensitive to the news flow.”

The outflows mark a shift for ETFs, which are typically buoyed by buy-and-hold money and have benefited from the growing popularity of passive investment strategies. While stock mutual funds have seen outflows for all but one week since February, ETFs have suffered just eight weeks of withdrawals, including the latest streak.

However, some of the worst-hit funds are those used by fast-moving traders, rather than retail investors, suggesting the outflows may not be sustained. About half of the recent cash exodus has come from the SPDR S&P 500 ETF Trust, the most actively traded equity ETF in the U.S. ETFs focused on emerging markets have also seen big withdrawals.